I actually kind of agree with the guy who said Magira was psychologically beaten, so punching him would be redundant. But... the guy nearly destroyed all of humanity and is directly involved in the deaths of a bunch of your friends, at least punch the guy in the face or something
http://takkynoko.tumblr.com/ My new blog

Or in the ovaries. Did you hear his scream? He sounded like a little girl.

Well first I had to thank TVN for bringing this much-awaited finale of Keitai. It's actually one of the reasons that I stayed in TVN forums. It had some nice moments on human values, virtues and philosophies some people may take for granted but a nice touch for a new gen of drama.

About the ending, yeah it's pretty disappointing that we didn't get a happy one. But the thought and feeling on the real theme of Keitai, at least rung true to me.

Sure the series really left humane questions:
How can be someone called human? Is it just about intelligence? What differ us from other lifeforms?

Japan is actively developing technology in robotics, especially focusing on human assistance. The series may or may not be addressing the issue, but at least we get a glimpse of what might the future may become in the course of robotics today. IMO, the thought of AI dominating humans is pretty scary.

On the second thought, we might be AI ourselves and scaring who created us.

I had my doubts about this series because the concept of cellphones doing anything like that was too weird (despite all the KR and SS I watch). There were a number of times I cringed at what was going on (Not out of fear, but embarrassment. Keita got a little too emotional at times). However, I couldn't stop watching.

About the final:
- It's bad enough that Fourth was out for the majority of the series, but did she have to die in the end too.
- Boy did Date feel stupid
- Mimisaka had some nice long hair
- Kind of wish there were some more cameos from other characters, including the other Under Anchor workers(you know, the girls in the repair shop)
- I thought the final conflict with Seven and Gene could have been better(I wish they had a more physical confrontation in their consciousness via Parallel Decentralization Link...with kicks and stuff)
- Why did they have to explain things to the police? I thought they had the police in their back pocket, sort of.

Thank you TV-Nihon, once again.

I wasn't expecting much from this episode so I was surprised they managed to get a few good dramatic moments mixed in with the cliche stuff.

Magira disappointed me as a villian. His motivations were too nebulous for me to understand. We got a hint at what was going on with him when Magira said he "understood why the Phone Bravers were born." It seems like the writers kept adding layers to his character but in the end forgot to peel them back so that we could see inside.

I wasn't too upset that all the Phone Bravers died since that is typical of science fiction stories. Many science fiction stories don't have happy endings because the genre deals in cautionary tales. At least they didn't have all life on Earth being wiped out. Throughout the show, I had a difficult time identifying the Phone Bravers as "alive" which probably led to my indifference to their deaths.

The way the story played out with Date-san was really interesting.

Keita, Kirihara, and Touka bonding at the end was a great moment.
Top

I think the main reason I dislike this ending was how heavy handed the story was told. Here's an insolvable problem, time for the robots to die for humanity. The humans were around just to scream, look scared, or keep the robots safe long enough for them to do their thing. I also kind of wish it was just half an hour long

Date comes off as being overly naive in order for this to work. He's helping to ship out Phone Braver clones, and he's surprised when they sprout arms and legs? It's not that hard to make a phone without arms and legs. At least Kirihara being duped makes sense since he only went along with it begrudgingly

I also kind of wish they showed what happened to Akira, Kikai, the other girls in Anchor, and Keita's family
http://takkynoko.tumblr.com/ My new blog

Totally agree about the half hour thing, Take-san.

So much of the episode was just time being wasted, and the integral bits were just one cliche after another.

I think someone else said in another thread that "if the series doesn't have a Blade level ending, then it isn't going to be satisfactory" or something like that, and its completely true.
Old school TVN member
formerly FA|RokkumanEXE
Top

DigitalKnight
Whoa. Neo is an anagram of One. Whoa

there is a little bit of info about the next season on wikipedia also there is this http://translate.google.com/translate?p ... ry_state0=
Top

whatever happened to Six?
Top

I finally got around to watching this.

I'll try not to repeat what anyone else has already said, but one of the main problems I found was that there was so much they had to finish up and only had about an hour to do so? It kinda reminds me of how NGE first ended. Hopefully, we'll get a Director's Cut to see more of a completed ending, because I feel as if the ending shown here isn't the intended one. For a show that built itself up fairly well during its run, it felt really half-assed.

Another tally for the "disappointed" column. After watching the whole series marathon-style, the ending felt like it belonged to a different show. The series had done such a great job of balancing the drama with light-hearted moments, but then the ending was just about as depressing as it could be. If this is normal for the science fiction genre, no wonder I've usually walked away frustrated by endings. A part of me (okay, a big part of me) would have preferred a happy ending, but I would have been okay with a somber ending if it had been written to make sense. This didn't. They pressed forward with the near-apocalypse, yet the final minutes showed a world where very little had changed.

I was okay with 01 dying - it served a purpose both in pushing the plot forward (even if I didn't like where the plot eventually went) and providing 01 with the redemption/answer he was looking for. Sad, but poignant. I was pleased that Third got a chance to say goodbye to Kirihara, but the timing of that final conversation felt forced to set up Keita and Seven's rescue. Seven's death did not make me happy. I was also annoyed that Seven basically melted in Keita's hands, yet he had no injuries after the fact. Little inconsistencies like that, which add up, bothered me.

Since I'm already trying to block the ending from my mind, Gene absorbed Eliza, right? I kept trying to brainstorm a loophole where the back-ups of the Bravers' memories might have been spared the destruction, at least leaving a glimmer of hope that the Buddies could be reunited some point in the future, but even that would be a dead-end if Eliza was wiped out.
Top

*sniff* I miss the show already. Say through out the show we hear of all the Phone bravers and what happen to them but the only one that is never mention is 6, what happen to 6 and who is the agent that is partner to 6? Also I was re-watching KR: The first movie again and I'm not sure if anyone notice the actress that played the chief was one of the shocker leaders!
Top

wow. who knew you could get so attached to cell phones? there were definitely a lot of tears coming out when they died.

01, third, and seven all became like people to me...of course, that was the whole point. i even cried when fourth died, cause what little we saw of her i liked, and because touko-san was crying. other people crying tend to help set me off too.

i know some were disappointed in the way they handled keita, especially what they did with him just pushing magira to the ground, but i feel like that was more consistent with his personality. remember, this is the boy who forgave 01, even though he'd done so much to seven and the other phone braves and their buddies. it was not in his nature to start hitting magira.
i really was hoping for a happy ending, but that is sometimes not in their vocabulary it seems. i've seen a lot of different kinds of asian shows, from taiwanese to korean to japanese that have unhappy endings of some kind. i was sort of hoping they would do something like making new phone braves if the others just had to die but...oh well...life goes on, as the ending shows. 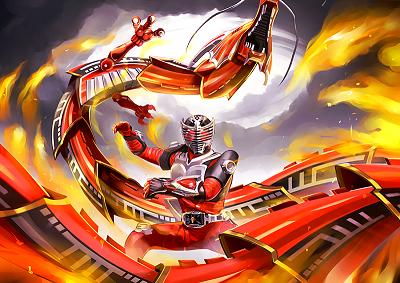 In a world where "right and wrong" are not black and white but shades of gray, one man fights to protect the innocent with the fire of his convictions.
Top
Post Reply
29 posts