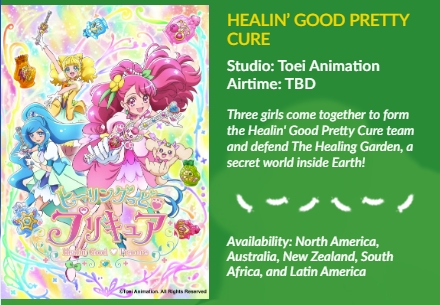 In a surprise move, Crunchyroll listed the current season of Pretty Cure alongside their Summer 2020 licenses. Personally, I'm stoked and it's so nice to know the franchise might finally have a chance over here that's not either Glitter Force or fansubs.

For anyone not in the know, Healin' Good♡Precure is about a girl named Hanadera Nodoka who moves to the town of Sukoyaka with her family after a mysterious illness devastated her body and left her in the hospital for a portion of her life. While exploring the town, she chances upon a group of fairies known as the Healing Animals and accepts becoming Cure Grace in order to give back to the people who helped her while she was sick. Joined by two of her classmates, they fight as Healin' Good♡Precure to protect their town from a group known as the Byougens; a group of demonic inhuman beings who wish to drown the human world in disease and pandemic so they can revive their boss.
Top

I thought most animes are licensed right before they even aired on actual dates recently?
Top

You'd think but Precure hasn't been that lucky.

Futari wa Pretty Cure got a dub in 2009 that aired in Canada produced by Toei and Ocean Studios. And, iirc there was a sub for it up on Crunchyroll courtesy of Toei before but I heard the quality for it wasn't too great.

Smile Precure got a dub in the form of Glitter Force that aired on Netflix in 2015. This dub removed 8 episodes and localized the show so that the girls weren't traveling to say, Osaka from Kyoto as much as they were traveling via bullet train to an "Asia Pacific Expo" that mirrored Japan and you can dress up as geisha and it was awkward. (There's also an unintentionally comical take on one episode where despite the show trying its best to convince you that it takes place in America, that they do nothing about Reika/Chloe's grandpa sitting in a Japanese-styled room doing kanji calligraphy when she asks him for advice. Nor how they flubbed localizing one of the MotW's questions so everyone acts completely flabbergasted that she knew Japanese. "You didn't think I knew how to speak Japanese, did you?"

In 2018, Saban Entertainment adapted Doki Doki Precure into Glitter Force Doki Doki. I only saw the first episode of this one and thought the show treating "Doki Doki" like it was a precious "Nakama" word was cringey. So, I never bothered watching the rest. I heard it cut out 21 episodes though which couldn't have worked well with Doki Doki trying to be more serialized than Smile was.

The licenses for both Glitter Force dubs went silent after Hasbro took ownership in 2018 and as far as anyone knew, that was kinda it for the franchise over here. Until today, that is.
Top

Not available in Europe. So fuck those of us here who want to watcjhPrecure I guess.

Region locking and anyone who supports it can go fuck themselves. It benefits no-one.
Seen:
Super Sentai: Zyuranger-Gingaman, Abaranger onwards.
Kamen Rider: Ichigou, and all the Heisei/Reiwa series except Amazons and the American shows.
Precure: DokiDoki-Go Pri and the first few episodes of Mahoutsukai and Futari.
Top

Region locking and anyone who supports it can go fuck themselves. It benefits no-one.

My "favourite" form of region locking recently is when a Japanese company that doesn't sell their show with English language subtitles or sell their show in a western market AT ALL cease and desist English language fansubs of their show so that unless you live in Japan and speak Japanese you're shit out of luck ever watching it, making it harder on themselves ever expanding into that western market and making more money from their product. It's almost as if they saw what has been happening with fansubs making Tokusatsu popular enough in the west that multiple different american companies have bought licenses to translate and sell Sentai, Ultraman & Metal Hero box sets or get people to purchase streaming service subscriptions to watch Kamen Rider or Ultraman and said "Nah, fuck that, why would we want to make more money from our product for no time/effort/money investment on our part?"

But hey, I live in Ireland and NONE of these shows get here anyway so what do I know.
Completed Series
Sentai : Abaranger-Ryusoulger
Kamen Rider : Black to Zi-O
Garo : Every non-anime season.