While it was funny to see them run into imouto Hakase and talk with Hatte Shogun, I kind of wish this episode were more Sentai orientated?

Looks like the last episode airs at a different time?
http://takkynoko.tumblr.com/ My new blog

Do you mean AkibaRed vs. Ultraman?

That ending scene makes me so funny.
Even it's the end of AkibaRanger...

I liked how it was all going fairly well until Hakase raised the huuuge death flag there.

It did seem a bit more disjointed than the previous series but I suppose that's only to be expected.
Top

I figured that was a reference to Rainbowman/Ultraman. Did Chaiyo make an original creation Ultraman?

I can't really place the monster in the center of the Ultramen:

I mean, it's not inconceivable since the original Aoi-tan was a Sailor Moon ripoff anime.
http://takkynoko.tumblr.com/ My new blog

MajinBOO
It's not even funny

Blame Yuuko ,She made the enemies too strong.

I didn't enjoy this season as good as the first. And the ending was sad this time around. :/
Inspire.
Top

takenoko wrote:I can't really place the monster in the center of the Ultramen: 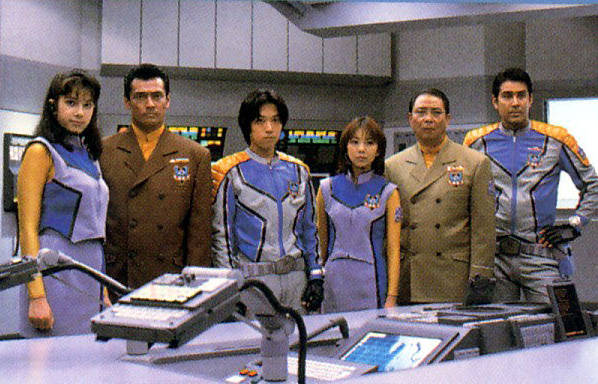 This whole episode is a dig to Tsuburaya. Prism Ace is obviously a parody of all all of the Ultramen, especially Ultra Seven and Ultraman Ace, with the head lamp beams of Hakase and Prism Ace being a parody of Emerium Beam. When Prism Ace arrives, he even has the sound of the rise that Ultramen, especially recently Zero, use. Prism Beam....C'mon, that has Wide Shot written all over it. The alien armada, that's the Zoffy scene from Mebius and Cosmos from his third movie.
Top

I was wondering about the huge alien fleet at the end and glad they didn't forget about it. I don't know why they didn't cancel the delusion though.

Anyway, Furuya Toru who did Prism Ace also did the VA for UFO-Man in an Ultraman parody anime called Ultimate Girls. So this isn't his first Ultraman parody.

Phoenix512 wrote:I was wondering about the huge alien fleet at the end and glad they didn't forget about it. I don't know why they didn't cancel the delusion though.


Thanks to the events of the episode, the delusional world and their world combined again, so they were in the battle with their physical body.

BULLSHIT! that's the flag for a SUPPOSED death in mecha animes. they are supposed to come back alive when everybody think they died.

So...ultraman is the true big bad...i have to admit, i did not see it coming.
Top

MajinBOO
It's not even funny

D'oh, I should have seen this coming. 12 episodes and then a clip show. Based on the ending of 11, I had seriously been expecting a full 13 episodes this time around, so I was a bit disappointed.

In any case, I agree it was a disjointed episode. Very good none the less, but certainly the most disjoint thing Akibaranger has ever done.

I will give credit to the writers for working in a riff on VS movies. For the final real episode of the series that's totally the way to go. I can't say I've watched Ultraman, so most of that is lost on me, but I do have a basic knowledge of the series, so I can appreciate riffing on that too.

Meanwhile I have mixed feelings on Tsuu Shogun. I'm glad that we got him back for a bit as the embodiment of Hatte (Hatte, as a character, in the show itself!), however I had been hoping Tsuu would get a more proper resurrection and send-off. Then again while Malshiina did get more screen time this season (finally), she didn't get much of a send off either.

Also, I'm glad to see we got one more giant fight on the city set. Since season 1 never got to do that it's fun to see that season 2 got to do it three times. Of course the design of their robo means that we can't have a proper hand to hand fight, but I'll gladly take an overgrown AkibaRed. Especially since they invoked the right-to-left rule, which I must admit I didn't realize at the time, but now is a blatantly obvious Sentai trope.

On a side note, I don't remember Hakase being shorter than Luna. Or have I just not been paying attention?

And oh that can. What can defeat the enemy in one attack, simply by bouncing off of something? The can can! Someone at Toei likes their cans.

Blue is fairly tall for a Japanese girl actually. The average Japanese girl is probably 160 cm tall, while Luna's actress is 164.4 (5ft 4inch) and she's only 14 years old, so she might gain a few more centimeters
http://takkynoko.tumblr.com/ My new blog

locuas wrote:BULLSHIT! that's the flag for a SUPPOSED death in mecha animes. they are supposed to come back alive when everybody think they died.