And another series comes to a conclusion. Man, 53 episodes.

I like Decade-style stuff, so this was a fun episode for me. I didn't recognize all the cosplay that Amadam was doing. I think I saw Garou and Silva?

Tsukasa had some pretty good lines. Plus, touching on the Riders being similar to the bad guys was a nice observation.

I didn't like Amadam's over the top acting. It was unnecessarily goofy. Also, why was this guy named after Kuuga's spirit stone if they weren't going anywhere with that?

The giant messy battle... was actually decently interesting to me. I dunno, something about the way they grouped all the Riders' attacks made it easily to process. I believe the concept is called chunking. Of course, all the enemies blurred together. There was no telling who was getting killed, but I guess that's the point?

Blade got a nice "Why the kitaaa" line, but otherwise not much interaction between the Riders. And Fourze's voice is too different from Gentarou's

Totally called the boy being Haruto.

So who are these characters supposed to be?

I didn't initially recognize the priest outfit either but I found out it's Super Douji from Hibiki. Still don't know the other black outfit Amadam wears. As for Amadam, I think he was partly mimicking the villains he was cosplaying as. I think it was apparent when he was Gaou since he was all serious and didn't really act goofy compare to the others.

Gaim is like "That was fun but I need to go back. See you later." in his first appearance. If the Kamen Riders were all failed kaijins, I just wonder if the kaijins in Gaim are all fruit monsters.

Decade got to say his catchphrase but at least no crazy hairstyle from him.

I wonder if Haruto is going to cry out another Infinity Ring since he gave it to alternate Haruto now.

Apparently they do a jump cut with Amadam, so it's not your player dropping frames. Apparently it's done on purpose, since it's not just our cap that does it.
http://takkynoko.tumblr.com/ My new blog

This seems like a failed script for the Wizard X Gaim movie they didn't want to throw out. Some of the message was good but Amadam was just weird and this was poorly cut together to the point of being incomprehensible at parts. It adds nothing to Wizard's story, nothing to Decade, and reuses the "what's a kamen rider? Oh, I guess I am!" thing they did with Wizard last year.

I honestly wish they had just taken two weeks off.
Top

Amadam was mostly mimicking the person he was cosplaying as. Maybe he could have done a better job at it but saying he was weird isn't exactly right.

I still think of it as a poorly written fanfic, but I got more amusement out of this episode than the last.

After a long while it is once again pointed out that (almost) every single Kamen Rider shares an origin with the kaijin they fight.
Top

Seems to me they screwed up with the schedule somewhere near the end mainly because between the battle with Wiseman and Gremlin there shouldn't have been two whole episodes.
That ruined the build up for the finale and the ending was as anticlimatic as possible.
Nothing really new at all, except a heart-stabbing punch with the power of "mixed feelings but mostly friendship".

After that they were left with 2 weeks to fill with something and Decade is the general purpose filler KR.
Top

jesh adaman took a lot of rider kicks before finally dying its got to be a record.
Top

Darkwings wrote:Seems to me they screwed up with the schedule somewhere near the end mainly because between the battle with Wiseman and Gremlin there shouldn't have been two whole episodes.

Going off this, it seems that 49-53 were well in the bag around the time this got printed (which does make sense, since they likely had to have had the Gaim suit put together by then); so yeah, while the finale could've been better, the scheduling seemed okay?
Top

I think the pic on the right is supposed to be a different colored version of the super Doji from Hibiki maybe?


takenoko wrote:So who are these characters supposed to be?
[ Image ][ Image ] 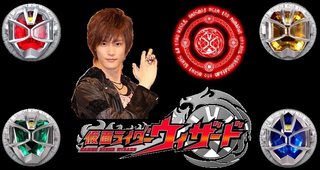 Well, another "FINALE" has aired, and now I don't know how to feel. It feels more to me like I just watched a movie, because of similar cinematography to the movies and how it's completely unrelated to the plot of the show. I usually watch the movies after the series ends, so this isn't weird or anticlimactic to me.

Anyways, the Decade stuff was odd, but enjoyable. I was cracking up when i heard "the decade speech music" because I knew what was going on. After like 5 years of it, it feels like self parody whenever "who are you" "I'm just a passing through kamen rider, remember that" happens. I could swear his actor was smirking saying that. Wish there was more about Decade, but he was just kind of a plot device at this point more than a real teamup.

The villain was weird. The fights were hard to follow, although seeing a rider with a giant bazooka shooting a robot t-rex was surreal and awesome

The second I saw young Haruto i knew that's who he was.

Wait... Beast died. What happened to Beast? Is this is a time paradox now? Old beast died and now the past is altered?
what people want to do to me after talking to me...

I thought it was interesting to watch
I kinda figured the young dude was a young Haruto, but my god
WHY YOU GIVE HIM THE INFINITY RING, HE'S SUPPOSE TO START WITH FIRE

I like how they pointed out that all riders were basically a Kajin thing, expect Agito
since every other rider borrowed like an element from their Kaijin (Kabuto clock up, Ryuki his dragon is a mirror monster, and etc)
No Agito spoilers
Top

ShadowThePika wrote:Wait... Beast died. What happened to Beast? Is this is a time paradox now? Old beast died and now the past is altered?

According to Shou Aikawa, who wrote these two episodes, Beast returned to his own world.
Top

Yeah Agito is slightly different. Although his origin is at the very least -similar- to the Unknown.

I don't think Kuuga is a Grongi either, although he is very much connected to them.
Top

I don't know why they bothered to treat it like that kid being Haruto was a giant mystery, it was so frigging obvious!
Top
Post Reply
63 posts