I liked it. It felt like a good Data from Star Trek story, plus we get to see all our friends from Drive again. I feel like Heart has some depth as a villain that you don't often see in these shows. Medic and Brain are also adorable in their own ways.

That said, I wish an editor put his scalpel to this, because it's way too long. It just has too many unneeded scenes or scenes that run too long that bog down the pacing. It felt like watching a director's cut of a movie. That 85 minute length should probably have been a tight 60.

The license smiling joke is back again, the producers must really love that joke.

It's nice to see Chase collaborating with his old Roidmude friends again. This really is more of a Roidmude story than a human Rider story.

The overall story is fine, I like the struggle Chase is going through, but there are some comedy scenes that I can go without :
- Wtf is with Belt-san and Rinna screaming at the eclipse on the roof?! That's totally out of character
- Belt-san is drinking milk from a dog bowl. What the heck dog bowl?!And he's already said he cannot eat in the series
- And I can go without Shinnosuke and Kiriko spilling juice on Go. I know Chase is creeping them out but there has to be a better way to demonstrate it.
- Medic... I don't even know what to say about her...
- Did they draw the Shift Cars with MS Paint or something?

And Chase is really creepy when he talks normally.

What is the purpose of the heavily injured woman beside Hinako's bed?

A sad hero story. It is convenient that Chase only lose the memory of this incident.

Nice call back to 051 who was also after money in the main series. But trying to tie back to the unknown program Banno and 004 installed in Belt-san is probably not needed. Because they didn't explain anything with 5 seconds screen time.

Gun shot, blood, implied sex, and self inflect injuries. This is a Japanese kids movie for you.

Aww, I liked Medic's sub story. It was cute. Although, I'm guessing it's just there to put her in a low cut dress in the end.

>What is the purpose of the heavily injured woman beside Hinako's bed?

Dunno. I'm guessing that's a suit actor or someone whose cameo is interesting?

>Gun shot, blood, implied sex, and self inflect injuries. This is a Japanese kids movie for you

Implied sex? Wait, did Data have sex with the Borg Queen in First Contact? Is that what he needed human skin for???
http://takkynoko.tumblr.com/ My new blog

Anyways, I like the spin-off. It's probably a Roidmude story... better than having Terui Ryuu / KR Accel in there.

That was really good. I was waiting a long time for this to come out and it did not disappoint.

I'm surprised at the adult content that was included in this. A female character taking their clothes off in a Japanese kids/teen show? Not expected and I didn't see how that helped develop the story.

The Drive/Mach side story was fun to watch. The main focus was on Chase, so I liked how they added a comedic element to the main rider's story. I was expecting more from Accel's appearance but I'm still happy with what we got.

Is this the only time we see 000 transform into Proto-Drive? I can't remembered if they showed that in series or not.
Top

So in those episodes, did we ever get a Henshin scene into Proto-Drive?
Top

As far as I know, I don't see any Henshin scenes of Proto-Drive... 'till now.

Yaiba wrote:Gun shot, blood, implied sex, and self inflect injuries. This is a Japanese kids movie for you.

Overall it wasn't a bad movie, but I didn't find it very captivating. Yaiba and Takenoko really hit upon the weak points: it ran too long and there were bits that were really, really weird. The Gaim movies were only a hair over an hour, so I'm not sure why they thought this needed to be 85 minutes long; but the slow pacing required to fill it didn't do it any favors.

Looking at the Wiki: Angel was played by Kaze no Shizuka?! Well I'll be dipped. I'm glad to see the actress has range beyond Shizuka's immaturity. She does the psycho ex thing almost a little too well.

takenoko wrote:Aww, I liked Medic's sub story. It was cute. Although, I'm guessing it's just there to put her in a low cut dress in the end.

I'm disappointed her story didn't amount to more. Of the three boss Roidmude, she already received the least attention in the series. So this would have been a good opportunity to expand on that rather than using her presence as a gag.


Implied sex? Wait, did Data have sex with the Borg Queen in First Contact? Is that what he needed human skin for???

Data was doin' it in the third episode of the series, the first regular episode after the pilot. Roddenberry didn't waste any time there.

Though it figures: Chase sees his first pair and that's all he can think about for the rest of the movie.

To draw another Data analogy, it's good that Chase's actor got a chance to break character and play Chase as trippin' on life. Playing an Android means playing a very narrow range, so it's good for the actor and the audience to see them step out now and then.


DaVinci030 wrote:better than having Terui Ryuu / KR Accel in there.

Having Accel in there was weird. I like the idea in concept, however since this wasn't Drive's movie to begin with, it felt more like padding than a meaningful cameo.


Yaiba wrote:Gun shot, blood, implied sex, and self inflect injuries. This is a Japanese kids movie for you.

Yep, sounds about right. And not a little bit of blood either; I was surprised at just how much gore we saw with Chase there at a the end.

Oh, haha, I can reencode it before release.

No one gets my references! The literal translation is all "living things". But for the sake of needless reference and the fact that Chase isn't protecting little squirrels and kitties, sentient beings worked. 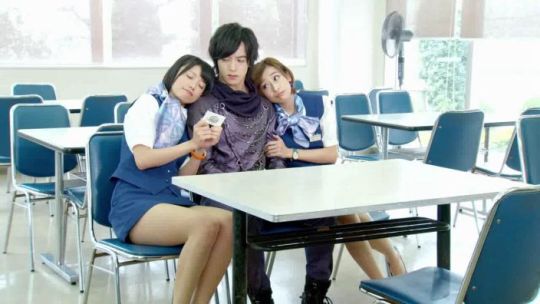 Granted it's his movie, but in this case Chase got all of the ladies.

Rinna and Krim basically laughing off Chase when he asked if he can get human emotions was a bit cruel.

I did like this overall. As other people have said, it's a Roidmude story which meant that most of the human cast didn't have much screen time. I think Krim himself had more screentime than Go and Tomari combined. No one mentioned that Krim did a spittake on Chase's new emotions as well.

Man I did not see another Roidmude would copy the same person. I don't know if that guy or the Roidmudes are just incredibly unlucky since he isn't the type of person worth copying.

All this time, Terui has a daughter now. He still is the sempai over Tomari.

Aha! I thought something seemed odd about Accel's font...


HowlingSnail wrote:I'm not sure a police officer should be selling coke.

Well really, what else are you supposed to do with all of that coke?