Eh, about as expected for the ending. Juyong gets his shirt torn off (hawt), we get a slightly one-sided boss fight, Torin fucks off somewhere and I still can't remember the name of the Blue ranger. Also Yamato shows up for some reason? I'm kinda surprised that it was the actual actor and not just the suit.

Not winning any originality points, but it wasn't bad, and at least it was entertaining. The theme songs were pretty catchy and action decent. I can think of worse shows to plonk a 5 year old in front of for 12.5 minutes.

And if there's one thing I can take away from this, it's how to say "Next time" in Korean, which I'm sure will come in useful.
Top

Yeah, it was fun. It was simple and the plot with its pacing was ridiculous, but it was at least entertaining? I think I liked the CGI fights more than others did. It looked bad and gamey, but at least it had some neat ideas. Like fighting a giant space station monster.

Gold, way to take minutes to yell out your brother's name, pause, then slash at the the tentacles to free him. The only thing that really was bad was that Juyong's great power was nothing more than a Mcguffin. Juyong never really uses it, and even with the energy sucked out, it's not like the last boss got powered up from it.

Edit:
Looking back, it was pretty weird working on this show in both Japanese and Korean. There were definite times when I was looking at the Korean version and going "Oh, I can see where you took the original Japanese and slightly got it wrong." And then there were other times where I'd go, "Oh, this makes much more sense in the Korean version, I wonder if Luna can edit the Japanese one so that it sounds better." It's odd how the two translations fed back into each other.
http://takkynoko.tumblr.com/ My new blog

Kyouryuuger Brave went out as it came in: loud and fast.

I have no grand insights to drop here. Red and Gold beat Deizarus in a straight-up fight with no shenanigans, which was fun enough to watch. I'm a bit surprised Deizarus didn't get any benefits from leeching off of Red at least a little bit, but everything is oh so packed for time.

Then of course we get the obligatory mecha battle. Having Deizarus use his ship is pretty consistent with the back-half of the series at this point (we haven't had a non-CGI fight in a while). Having Brave KyouyuuJin flung up by Baggias was a good sight gag and equally amusing way for them to get up there. I liked how non-nonchalant the backup crew was about the whole thing; they just had their flight incapable robo flung far up into the sky to get off one attack (with that excellent shot of them passing Pteravolton on the way up), trusting that Red and Gold would catch up with them to form the 6-piece robo in time. Too often mecha fights are treated as turn based battles, so new forms are made mid-turn; doing the flying formation while they were falling is a nice deviation from that.

Meanwhile, for how important the Dinosaur King power is supposed to be, why did it take Red until the last couple of minutes of the last episode to figure out how to use it? If he had done this an episode ago, all of our problems would have been solved early.:p

Series observations Overall this series didn't have the runtime to do anything deep, but it was entertaining enough. I wouldn't want mainline Sentai to go the same route, and I hope if anything it's provided the South Korean broadcaster to do a fuller series. But I enjoyed watching it as this odd little Kyouryuuger side story.


Lunagel wrote:Torin fucks off somewhere and I still can't remember the name of the Blue ranger.

He went back to being dead. Presumably to avoid violating 100 Years Later.

Also Yamato shows up for some reason? I'm kinda surprised that it was the actual actor and not just the suit.

That really surprised me as well. AFAIK SK dubs Sentai, so I have to assume this was their version of the Red Ranger handoff, and that SK started airing their Zyuohger dub after this ended. It doesn't in any way work with the loose ordering of Sentai shows (SK would have wrapped up their dub of Ninninger earlier this year), but it's a nice gesture all the same.


takenoko wrote:I think I liked the CGI fights more than others did. It looked bad and gamey, but at least it had some neat ideas. Like fighting a giant space station monster.

I wish the CGI was better. However there were two things that I felt was in the series' favor here: 1) They seem to have a new GFX package that has physically accurate particle rendering. So even if everything wasn't very well detailed, smoke and other effects looked very near realistic. 2) The short runtime meant they had to avoid the bombastic use of CGI that the movies are known for. They got the fight done without a 2 minute sequence of everyone grunting together as they come in for the final attack.
Last edited by ViRGE on Sun Jul 02, 2017 7:58 am, edited 1 time in total.
Top

And thus ends this mini-journey. Nothing epic, nothing awful, just fun. Though, now that it's over I can focus on editing the episodes together and seeing if the story works better as a 2 hour movie rather than a 12 episode mini-series.
Top

It was fine series for what it is
while I'm in preference for the mecha suit fights, I can accept it for this series

Torin goes back to the afterlife because series over, ok. So would this mean that Candelilla and Luckyuro would have to prepare for the future team without Torin considering he can just pop in and out of the afterlife

Deisaurus goes down with his ship, shame this Dinosaur King/ Dragon King power didn't factor to a power boost for him, nor do we know where it originated from.

And Daigo 2.0 & Raiden have the Zyuohger batteries for some reason but I did like the fact that Yamato appeared out of suit to signal for the Korean audience that they are next in line to save Earth but for the Japanese audience it would be a little odd seeing them when the Ninningers were their predecessors but whatever.

I see potential in Korean sequel series if this was a success in Toei's eyes but they would have to be really lucky, my best guess for a potential Korean sequel series would be through Kyuranger considering how many toys the series will get but I wouldn't know
Currently Watching
Super Sentai: Ryusoulger
Kamen Rider: Zero One
Ultraman: None

I really enjoyed this twelve-part continuation, and huge congrats and thanks to the team for dubbing both versions of this. One thing that i will say about this is i really wish we had Deisaurus in the full series as while he didn't have time to grow as a big bad, he felt more threatening and impactful than Deboss ever did imo. but i was happy with what we got, I was really surprised however that we got a Red/Red handoff for this season but nice to see either way
Top 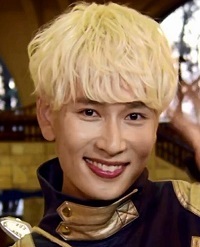 Many thanks to the subbing team for your hard work. Otsukaresamadeshita.
Overall I enjoyed this mini series

ViRGE wrote: [*]Does Gold's actor have martial arts training? I've noticed that he ended up doing vastly more untransformed fighting than anyone else, including Red.

In one interview with KpopStarz, Seyoung said that the director praised him that he's good in action scene so he added more action scenes for Gold even though the original script didn't have it.

I'm not sure if Seyoung had learned any martial art before (well... I don't think so) but he has already finished his military service.
Top

Thanks for the background info.

Also Yamata appears in this finale
Dino Force Brave: It's like passing the torch for the upcoming Power Rangers Animal Force in South Korea
Kyoryuger Brave: Just to have meet Zyuohgers, that's all
Top
Post Reply
9 posts • Page 1 of 1