What a weird episode. But it was kinda good, with Kuroto being a decent villain and most of the themes working pretty well.

When Sougo says "We don't know if this is a picture of Oda Nobunaga" I half expected them to go "Let's hop in ye old time machine and find out." If they follow up on this, I will be impressed.

Sougo fanboying all over Kuroto is weird to watch. Him catching Kuroto's hand is cool, but it's weird to think of known villain Dan Kuroto just straight up beating on women. There's just some lines you don't cross in a kid's show!

I appreciated Tsukuyomi looking at the watch and realizing Genm looks like Ex-Aid. It struck a good balance between knowledge the viewer already has versus character knowledge, without coming off as overly exposition heavy.

Did anyone else hear Kamen Rider Woz instead of OOO whenever Woz was on screen?

How'd they afford Takada Riho, wasn't she doing some acting for a Hollywood movie?

How did Precure slip their name into the Guinness Book of World Records? Under what category?

Nine episodes in and Sougo's acting is still wooden. I suppose we're supposed to think he's quirky and naive while still being ambitious, but there's just something lacking. But then again, I watched all of Ex-Aid and Build without liking their main protagonists, so I guess it's not a deal breaker for me. Huh. Damn Toei, maybe work on your protagonists. I think the last one that was decent for me was Drive? 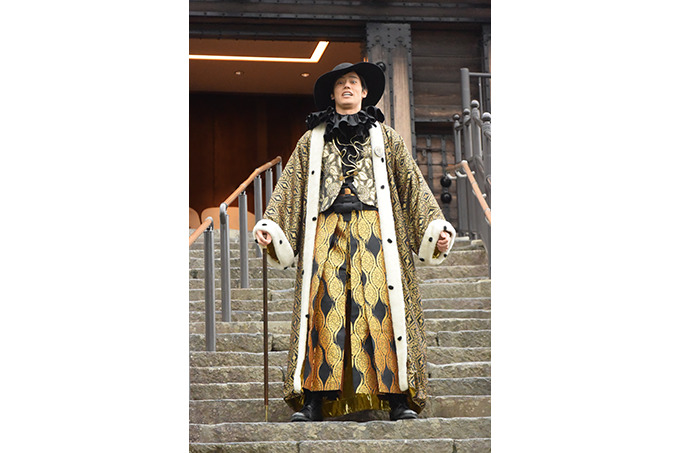 Pimp Kuroto in the house
http://takkynoko.tumblr.com/ My new blog

Awesome because Kuroto treats Sougo like a dog.
http://takkynoko.tumblr.com/ My new blog

Of course, Sougo would be fascinated by Dan Kuroto to the point that he’d ignore people in trouble. Regardless of timeline, he’s the franchise’s Memelord.

Tsuku-chan, where’s your Mazine? TSUKU-CHAN, STOP THOSE TWO. Not yet, you two. Not just yet. This is not the final battle people want.

One more thing: Takashi Ukaji tweeted “cool” when someone showed him today’s episode. I miss him.
Introducing Keisuke Watanabe to a notable voice actor of Freeza & a TTRPG player/actress is likely my crowning achievement in 2020.
Top

Yeah, it's a pity they couldn't get President Kougami. I'm sure the memes miss him too.
http://takkynoko.tumblr.com/ My new blog

takenoko wrote: ↑
Sat Oct 27, 2018 8:09 pm
How did Precure slip their name into the Guinness Book of World Records? Under what category?

For the most magical warriors in an anime movie. I'm serious.
Top

Well done Toei, that's now 2/9 episodes competently written. Kuroto became Another OOO in 2010, re-writing his history, which also means a lack of Ex-Aid doesn't doom the world. Although Sougo is a complete moron. Kuroto murders and imprisons people, and he somehow idolises him.
Seen:
Super Sentai: Zyuranger-Gingaman, Abaranger onwards.
Kamen Rider: Ichigou, and all the Heisei/Reiwa series except Amazons and the American shows.
Precure: DokiDoki-Go Pri and the first few episodes of Mahoutsukai and Futari.
Top

Giving this my first 4.

Too bad this show is written by Vince Russomoto. The next episode would be a good time to break the news to Giez that Zi-O isn't a clueless moron, just someone who likes to troll a lot. The next episode should have a flashback to Tsukuyomi talking to Soujo and Soujo tells her that he's gone undercover and needs to beat up Geiz to get credibility but he won't hurt Giez too bad so play along. But, (my conjecture) next episode we will find out that Soujo is only being a king's servant because he is stupid.

Shouldn't Hina be able to grab the King's hand and make him cry like a baby? There was nothing about Hina's strength that was Rider related.

The the king off Dr. Maki to take power? I thought I saw creepy doll on the desk.
Top

As much as it's nice to see Kuroto, I still think his whole craziness is completely overblown. It was ridiculous in his series, stupid in Heisei Generations Final, and here, for me, it is almost too much. Still, at least the portrayal's consistent.

Sougo is such an idiot in this, almost as if he's proving a point. Geiz's turnaround against him feels really forced, though in character for Geiz. The Genm Armour is pretty cool though. The acting in the main trio isn't improving as a much as I would expect by now, to the point where the villains are portrayed more convincingly. The Timejackers are showing they can be competent at trying to change the timeline by using Kuroto's ambition, although I kinda wish the dynamic was different between them.

Another OOO looks really good, as with most of the Another Riders. The monster designs this year are brilliant. Can't wait to see the OOO armour in action.

For us US fans is having Dan Kuroto as an emperor any better than the president we have now?
Top

I didn't watch Ex-Aid since the gamer references went over my head. However, they did remind me of a wrestling match ...

I would vote for Dan Kuroto if he ran for president xD. Also love how Sougo dodged Geiz kick at just the right moment so that it ended up turning his driver. His fighting at the end reminded me of Tendou and how cocky he is xD

I love how they completely shade the fact that Kamen Rider is usually commanded by toy sales in the 9.5. I also like them keeping some of the mistakes in from Shogo's actor then for Dan to make a fool out of him. At least Woz stayed in character throughout it, it was clearly improv and Shogo had no idea what he was doing.

On the actual episode, I'm going to bring back a sentiment I had in a previous post. No matter what you think of the show. You can admit that the writers of the show is trying to make some interesting plots. In Decade shit happened just to happen, we were supposed to believe an 7 year old was Kiva because the show said. People complained about the lack of returning actors so now they have to tell a story with 'legends' and make it possible. They also don't want to reuse the same formula they had in the Build Episodes with the legends from that arc. We have had some pretty nice uses of the formula. The Faiz/Fourze combo. Now we have the Genm/OOOs combo. Which the only way this combo works is if Ex-Aid never happened. Since the Genm corporation was never made. You can see they wanted to make games with the Dan Foundation with the poster, however it isn't Genm. I also think it's implied that Kuroto killed Maki. The actor they got to play Shogo is bad. Which is probably why I'm liking the .5s more. Since it's part of the joke they are acting wooden. I can say the show is getting better little by little every week in my opinion.
Top

'Strange' and 'weird' is definitely a good way to describe this one. As someone who likes Kuroto, I can't help but feel like his craziness is a bit overplayed, which might be weird to say since it's not like he went overboard with it here or anything. Making him Another OOO and another 'King' is really amusing though.

I imagine Sougo has some kind of plan behind his actions (at least I really hope so), but there's no point making any guesses before the next episode. If there is a plan, I have to wonder if Geiz was in on it. If not, then wow did he put up a poor fight against Zi-O, a guy with similar abilities and has been a rider for less time than him.

I was absolutely taken aback that they got both Hina and Eiji's actors back though! ...And the first thing that happens to Hina is being creeped on and then slapped. Uh... That soured my mood really quick. Not only have I never expected Kuroto to display that kind of Kusaka-level badness, but I get the feeling that Hina is not going to do anything impressive next episode so what happened in that scene is going to be the most significant thing that happens to her for this comeback. Urgh.

Oh, and the Genm Armour looked cool, I guess. I wished it's finishing attack used the bicycle somehow, and I'll also be surprised if it ever gets used after this episode.

Yep, that was definitely a weird episode. The best episode of the series thus far, but also the oddest. It may very well be the best episode because I'm left here not knowing entirely what to make of it.

The episode promised us Dan Kuroto, and we got Dan Kuroto in spades. For better or worse it's easily the strongest point of the episode. The man may play a narrow (if not one-note) character, but damn if he doesn't do it well. The over-the-top hamminess of it brings a smile to my face every single time. I hope to find out he offed his old man as well. Though the Pimp Kuroto outfit may be a bit overdone.

Meanwhile, I can only come to the conclusion that Sougo is actually an idiot. Possibly an idiot savant, but definitely an idiot through and through. Nothing about what he's doing and his chipper attitude about it makes a damn bit of sense. His whole "I want to be the king" schtick was cringe-worthy to begin with, and every time they bring it back it's like he suddenly loses 10 IQ points. I really, really hope this is going somewhere.

And that Geiz vs. Zi-O fight felt entirely tacked on/out of place. The fight choreography was fantastic, and I liked how easily Zi-O dispatched Geiz. But the show just kind of jumped into it. There wasn't a good reason for it and it wasn't setup well at all.


takenoko wrote: ↑
Sat Oct 27, 2018 8:09 pm
but it's weird to think of known villain Dan Kuroto just straight up beating on women. There's just some lines you don't cross in a kid's show!

It really isn't a line you're meant to cross. And it's uncomfortable to watch as a result. Everything else in these shows is fantastic, unrealistic violence. Kaiju and superheros in rubber suits with impossible weapons and flashy attacks. But beating up a woman? That's very real violence that's happening right now. It definitely sells Pimp Kuroto to be an evil SOB, but it's unnervingly real.


How'd they afford Takada Riho, wasn't she doing some acting for a Hollywood movie?

Is that the original actress for Hina?! It's been 8 years and she doesn't look like she's aged a day!

That was legitimately hilarious. And now I am legitimately questioning whether the TV and toy schedule was deliberately altered in order to accommodate his filming schedule.

Also, Sougo's actor has such a girly laugh.

Yeah, that was definitely Maki's doll. Though it may have just been intended as an easter egg.


jamebarktoku wrote: ↑
Fri Nov 02, 2018 4:27 pm
Another OOO looks really good, as with most of the Another Riders. The monster designs this year are brilliant.

All of the Another Rider designs have been fantastic; they're multiple steps above the usual MOTW outfits and even the movie monster outfits. Especially with the working eyes and mouths.

The flip side to that is that it leaves me a bit worried here about the future. These suits undoubtedly cost a small fortune to make; now is Toei going to pull an Ex-Aid/Build on us and endlessly reuse and repaint the same suits over and over again to save money later on?
Last edited by ViRGE on Sat Nov 03, 2018 3:53 pm, edited 1 time in total.
Top
Post Reply
35 posts