Alt Title: No Ryusoulger, you did not earn that

Was fine with this being a Nada episode, but then Koh popped out.

Wait, when did Nada make that video. They got kidnapped while they were playing ping pong.

Dude, I know this series has it's problem, but come on. You guys didn't earn that character death. He just got redeemed like a week ago, and now you're already killing him off for a power up for red? It feels rushed and tacky, and comes off as amateurish story telling.

You're taking the one thing shaking up the story to just make red more of an overpowered lone wolf again. That sucks.

Like everything up till that point I was kind of into. Uden has a cool ability and I enjoyed watching the Ryusoulgers fight against their own powers. Killing Uden off after just one episode seems like a mistake too.
http://takkynoko.tumblr.com/ My new blog 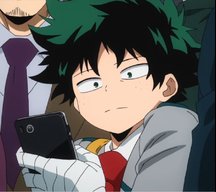 CrazyAznKT
There are four lights!

They really needed to keep Nada around for a few more episodes before killing him off. He didn't even get a proper roll call sequence this episode! He says all the things but it's just a warehouse behind him with no cuts, it's such a dead giveaway (no pun intended) in the editing of the episode. I'm told it has something to do with toy release schedules too?
Top

From a storytelling perspective it's balls dumb. One of the worst things I've seen in sentai stories in many years.
http://takkynoko.tumblr.com/ My new blog

Nada definitely grew on me as a character and by this point I was probably more invested in his story/development than in any of the others. Emotion was MAX (Abaranger reference pun intended) when they killed him off and I was admittedly quite upset - so if I was voting about how moving this scene was then 5/5; but this was abominable, makes no sense given the cheerful first 5 min and adds NOTHING to the story. So 1/5. And I hope they revive him at the end just to prove that they have no idea what on earth they are doing.

Spoilers for Zyuranger/Abaranger/Kyouryuuger
SpoilerShow
All dino sentai have had main character deaths before, with Burai, Mikoto and Torin. So not sure if they just wanted to "follow the trend". The Red upgrade to Max is suspicious given AbareMax.

Apologies for the VERY LATE episode, I was sitting around with my thumbs up my ass waiting for the new effects. There's still not a new Max Change effect yet, I kinda forced the episode through with what we had.

I didn't like Nada and thought his whole storyline was dumb but man, killing him off just as he's become a ranger so he can become a new power-up for Red? That's cold man. What's the male equivalent of fridging? Cause this was it.
Top

Man, that was weak. It started strong and then became weak.

You know it's bad when the death of character makes you feel bored instead of sad and engaged.

Probably before the went to play ping-pong would be my guess.

The design behind Max RyusoulRed AND his dialog last episode is a dead (pun intended) giveaway that Nada/Gaisorg won't stick around longer.

And I honestly hated this kind of Super Sentai trope, but ah, well.
Top

I think everyones sentiments about this episode are also my own.

Just for absolute unoriginality, they even copy the name of Abare Reds Max form. I'm sick of this series.
Top

Luna, what you mentioned on the front page about you at a doctor's office, that means you were sick for a few days?
Top

Just wow... This is a new low.. did they litterly kill this dude off for a power up?!??!! Like are 7th rangers really hated that badly?!?!

this felt like Aerith not taking a phoenix down levels of stupid.

So, if I were to look at this episode entirely in a vacuum, it would actually be pretty decent. The villain here was pretty menacing, the character moments in the beginning and nice and fun, most of the heavy moments I thought were done well alongside some really nice cinematography, and the action was all stellar. That video would have been a really bittersweet note to end the episode on.

However, it's impossible to ignore how transparent this episode was in wanting to get rid of Nada as soon as possible now that the story was done with him, and they were being so blatant in trying to cram in the character development they didn't give him for weeks into this first ten minutes of this episode. I'll be honest, after the previous week, I had a suspicion that Nada would eventually be taken out in order to raise the stakes because he is more obviously expendable compared to the other rangers, but I didn't think it'd happen in literally the very next episode.

By far the stupidest part was when Koh tried to use the magic healing soul and Nada is like "There's no time for that!" even though there's apparently plenty of time to have a drawn-out scene to impart some dying words... Why did they even include that in the script? If you ignored that, I think most viewers would have just went ahead and assumed the wound was too grave to be healed.

So yeah, I couldn't get into the emotional aspect of this death because despite how well-done it might be when looking at the episode by itself, the surrounding context just makes it look so mean-spirited and just obviously due to wanting to just move on from having Nada around. Ugh.

Red's new form is at least really cool. I think I like it better than Shishi Red Orion, though I have to wait until the exciting newness of the form fades a bit before I can say for sure. It looks like an invincible armoured knight, the Gaisorg parts painted red look really good, and the fight scene displaying it's moves and powers was especially spectacular. And I'm sure it's me being hopelessly optimistic, but I hope this power-up means the other Ryusoulgers can finally start using the other armours at this point. So, unless I'm forgetting something, Gaisoulg's timeline goes like this.

-He first appears with the bad guys, and looks like he is working for them.

-He fights with the good guys, and there are hints he's one of The Masters.

-Nada comes in, and acts like he wants to take Reds power.

-It's revealed that Nada isn't a bad guy, the armor is bad.

-Koh takes the armor for a bit, then the rest of the team make the armor not bad.

-Koh gets his fifth or sixth power up this season.

What a waste of a plot point and character. Not only was this death unearned, it seemed like it came out of left field. One good stab and he's gone. This one just felt hollow.
Top

Aren't children like infants? 6 years is like most of a kid's life at their age lol.
http://takkynoko.tumblr.com/ My new blog