Last Kiramager's rating: No poll since last week isn't out yet

Happier with t his week's episode, since there was more team dynamism.

Picked up on the clues that silver was Muryou's brother when he said he was the senior. Good casting since they look like they could be related in real life.

How does silver know he needs Muryou's mecha before he goes on the search, since he doesn't even find the spot until Sayo helps him solve the riddle. Did he know from reading the script?

So Takamichi was basically an adult when he got taken away by the crystal people. So why's he such a weirdo now? Where did the term mamarinafunifuni come from?

Sad there's no Jamenshi to go with the giant beast this week
http://takkynoko.tumblr.com/ My new blog

lolllll Minami and Koutarou, I see what u did there

Clearly some backstory we're going to get later about something Silver's searching for. Perhaps his father? Hmm 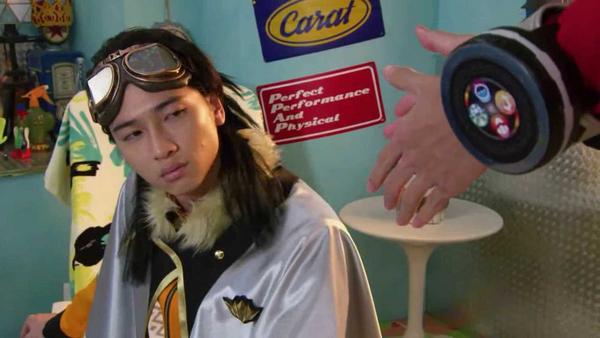 Oh you bastards how long has that reference been there?

Mashin Folktale Theatre -
It was dumb! It was obvious! It was pointless! It was... short...
I loved it!
Top

Oh dang, how long has that sticker been there?
http://takkynoko.tumblr.com/ My new blog

Great, now I'm gonna have to go back through all the episodes so far and look.
Top

Not a bad episode, but I was hoping for either a solid orange, purple or grey ranger to go with the gemstone base. I'm not sure about a natural silver gemstone, maybe a peridot, but an amethyst ranger would look so much better because the darker color could hint at a deeper relation with Garza. I guess the writers are blind to the ideas of deeper meanings at this point. Speaking of being blind, I don't like that Sheena's eyes are practically the same color as her skin as it looks like she has her eyes closed at the time to avoid seeing something she shouldn't. While the closed eyes worked for the Gouma, give the princess pink or peach colored eyes that can change shape to show emotion outside of the chime sounds.
Top

Can I just say, I totally called it saying he was adopted. However, I didn't expect that would be revealed literally the next episode.
I also didn't expect him to be Muryou's OLDER brother, that really caught me off guard.

takenoko wrote: ↑
Sat Jul 04, 2020 9:26 pm
So Takamichi was basically an adult when he got taken away by the crystal people. So why's he such a weirdo now? Where did the term mamarinafunifuni come from?

He probably was already a weirdo back then.
CheetahLynx
I was gonna list all the series I've watched but there's a 255 character limit. ¯\_(ツ)_/¯ Oh well.
Top

Posts: 5123
Joined: Tue Dec 15, 2009 1:47 pm
Favorite series: Kyoryuger
2nd Favorite Series: W
Quote: "When I first started, I knew everything about nothing and have progressed in the subsequent two decades, realising that now I know practically nothing about everything"

So if CARAT can just make giant mecha, why don't they supplement the main 5 stones?

Interested to see what the deal with Silver and his uncle is. I'm guessing he was set up to be away for the attack and needs a particular treasure for something.
Top

Can I just ask, which order were the two Mashin Theatres released in?
Top

Urashima then North Wind. Didn't notice there were two out already until last week oops
Top

Got it. Thanks Lunagel!
Top

eh hes adopted. but at least his redonkulous strength comes from having a monstone and special stones inside his body. so theres that.

But, the issue is how long did it take Carat to build that triple drill dream? Im guessing he meant to be a daimond from his finisher and that fact he uses drills. When his jack hammer weapon was on uncles shoulder, its ESPECIALLY toy looking. Like it was hard to really believe the prop was a deadly weapon. Sure sentai weapons are all plastic looking, but not as playskool as Silvers weapon.

his mechas robo mode is obvious to tell from how it was attacking. will be interesting to see how, if at all, it merges with Kirameijin.
I work too much ....
https://www.facebook.com/ThisGeekLife
https://twitter.com/Samuraibirru
Check out my gaming vids!
Top

Who else keeps seeing moon stone for monstone?
http://takkynoko.tumblr.com/ My new blog

Seems like there will be a lot of Yaoi next episode from the preview?
Top

Found it. It's been there since episode 2, they just made sure to keep it covered up until now.

Edit: There's a full view in episode 5. Must of overlooked it. Oh, well.
Top

My wild prediction is that the kiramei stone in his body keeping the monstone at bay is failing or the effect is wearing off and his treasure hunt is an attempt to find something stronger.
Top
Post Reply
23 posts