<takenoko> this week's monster of the week is boba fett?
<Magenta> momotaros fett
<jonty> It's a cross-promo for how George Lucas is going to re-do boba for the Blu-ray releases of the original trilogy
<takenoko> noooooo

I'm a little confused as to why Sid didn't challenge the guy. Because Waruzu didn't order him to do that?

Whoa, spooky. I like the dark filter used in this scene

The Jetman suits are pretty nice. I'm glad they didn't just CGI all that in.

16:12 The cup of noodle apparently is called Ako-chan. I think it's a fictional brand from the Jetman universe:
http://www.youtube.com/watch?v=u7QokF7hps4

Weird, kind of seems like the monster of the week should have been a reoccurring character

Overall, I really liked this episode. It has a gravity of seriousness that made it really compelling. I almost wonder if Gai couldn't see the other Gai because he just is too comic relief to fit into the heavy drama that is Jetman (or so I presume, not having seen the show).


Trivia
By the way, the Gai in Yuuki Gai 結城凱 means "victory song". Gokaiger Gai means "armor" or something.

MOTW: Kiaidou from the martial arts aikido 合気道. Just switch the ki and the ai.
From the wiki: Aikido is often translated as "the Way of unifying (with) life energy" or as "the Way of harmonious spirit."
However, kiai is also a word:
Kiai 気合 【きあい】 (n) scream, yell, fighting spirit, (P)
"Path of the fighting spirit" sounds like a good fit for this guy. Pity he only lasted one episode

I think I know why Gai hates nattou. I guess there's a superstition among the Japanese that eating nattou suppresses male hormones:
http://detail.chiebukuro.yahoo.co.jp/qa ... 1240640662

Text: A true horror story. Where he disappeared, there was a tombstone. My friend couldn't see him. What should I do?
http://takkynoko.tumblr.com/ My new blog

Oh yeah, I never figured out why he calls Joe a nattou man. Nattou is fermented soybean. It has strong flavor. It's pretty widely regarded as either you like it or find it super nasty.
http://en.wikipedia.org/wiki/Natt%C5%8D

One explanation I heard from QC I think said that Gai didn't like nattou. But why would he attribute that to Joe is beyond me.

Edit:
Still working on it. At the end, when Gai tells them to not anything, he literally says "Don't say anything, or my butt will start itching." I haven't seen any reference to this as an idiom, but I imagine it's just a way of expressing discomfort.
http://takkynoko.tumblr.com/ My new blog

I don't get it
http://takkynoko.tumblr.com/ My new blog

It's the writing credit for the episode, which is Toshiki Inoue this time.
No real joke there, I just find it amusing.
Top

The opening of the episode (the drinking and cards) seemed out of place. I was like "Am I watching the right show?" It was only at the end that it made some sense. Speaking of which, who's the girl that Yuuki Gai was conversing with at the beginning?

Funny how Navi's prophecy was an accident this time. And it's fair enough that Joe and Luka notice that Marvelous was acting weird. They are the two 'oldest' members on the team.

Seeing how Damarasu and Boba Fett Kiaidou were apparently about to face off... It reminds me... Damarasu gives off the shadowy underling vibe, but we've yet to actually see him do much. The only notable thing that he did was get Basco to deal with the Gokaigers. (At least that's all I can recall.)

Kiaidou felt like someone who could have lasted a few more episodes. I wonder why they decided to just write him off in just one episode. He didn't even become a giant.

I don't quite get why Gai can't see Yuuki Gai.

It would seem that the episode showed a lot of Yuuki Gai's hobbies. In the Jetman series, Black Condor was into motorbikes, gambling, womanizing and playing the saxophone. We see those references in this episode.

>Speaking of which, who's the girl that Yuuki Gai was conversing with at the beginning?

Alright, so I finally figured out why Gai called Joe a Nattou to otoko. I guess that was his way of calling Joe effeminate. I guess there's a superstition among the Japanese that eating nattou suppresses male hormones:
http://detail.chiebukuro.yahoo.co.jp/qa ... 1240640662
http://takkynoko.tumblr.com/ My new blog

Nonetheless, awesome episode and great to see Gai once again ^^

takenoko wrote:>Speaking of which, who's the girl that Yuuki Gai was conversing with at the beginning?

Alright, so I finally figured out why Gai called Joe a Nattou to otoko. I guess that was his way of calling Joe effeminate. I guess there's a superstition among the Japanese that eating nattou suppresses male hormones:
http://detail.chiebukuro.yahoo.co.jp/qa ... 1240640662

It's not just a Japanese superstition. Many doctors around the world believe that soy's high content of isoflavones, chemicals similar (yet not equal) to estrogen, might function in the human body as human estrogen, inhibiting testosterone (and possibly increasing risk of cancer).

There are no conclusive studies, though.
Top

While I would have liked Kiaidou to become a recurring character, it wouldn't make sense for Marvelous to have two rivals. (I'm guessing Basco)
Top

I thought it was nice that they finally settled that rumor as to whether or not Black Condor was actually killed during the finale of Jetman.
Top

In my opinion, if they were trying to make the show as realistic as possible, marverlous would have piss himself during the flashback. (I know i would)

Inoue wrote Jetman though, it's only fair he comes back. And I'm glad he didn't beat around the bush with the whole he's dead thing and made it interesting from the get go. Only Gai would be in a bar with God though. It's also good because it also removes any speculation left over from Jetman. I'm glad his team-mates visit his grave regularly as well.

And maybe Gai can't see Gai because he's human? The rest of the Gokaigers are technically aliens. I don't know, the only reason I can think of.
Top

I think we all need to take a moment to appreciate this image:

Even the Goumin are stunned by the beauty of that kick. That is a kick a Rider could be proud of. 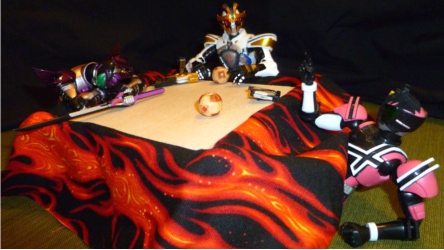