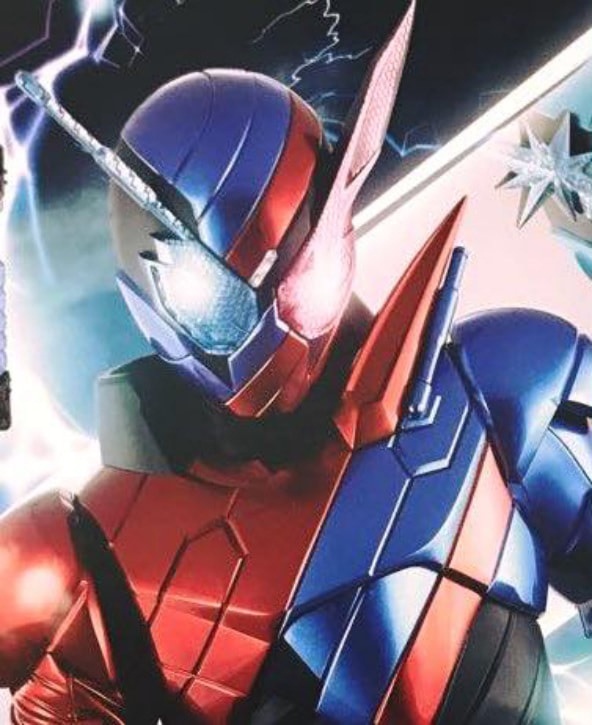 This episode was just full of awesome, I had to stop eating my sammich. I'm also surprised we''re half way done and every episode as been a blast and I feel bad for saying it even blows away Wizard
Kamen Rider left to finish:

I knew Takatora's end was coming. The fact that he got all swoon-y over Kouta just sealed it further and further. But dammit I liked him! Even as an antagonist!

I'm with everyone who says he'll come back as stock Zangetsu. No body, and an assumption that nobody could have fallen from that height and survived. For all we know he had a Lock Vehicle on him, even if there needs to be a retcon.

Looking at the two Lemon Energy transformations, I think its better that the suits aren't identical. Ryouma's suit is, well, reminiscent of a duke (Hence the name) or a king (with the crown on his helmet) whereas Kaito's is closer to a knight. I'm okay with the colour differences too.

And man, I cannot WAIT for the moment Micchi is discovered by Kouta. I was even hoping Kouta would go full-burst against Micchi and knock him out of the suit, but I guess we'll see that in the future.
Top

I been thinking about this and everyone at Yggdrasill has a great deal of ego except for one person. That person is Malika. She doesn't seem to have any particular motivations except for following Ryouma's orders. She is just an enigma within Yggdrasill.

Another great of episode of Gaim. But is Takatora really dead??
Top I don't think so mate, he might live since there's a river.

And about riders no having job... does wizard have any job aside from being a rider, see fourze is a student so his exempted, W are detectives, Kiva is a musician and a prince, OOO's rich, decade is the leader of shocker, not sure about the others.

huuthien2911
I am not a number. I am an individual!

If I'm not wrong then agito is a cop, ryuki is a journalist, blade work for BOARD, Faiz work part-time, kabuto is a freelancer (he have gone through too many job lolz), Hibiko work for his organization. Not sure about Den-O and Kuuga.


SpoilerShow
Good for you that you know this but don't say that in the future or be banned
Last edited by Phoenix512 on Thu May 08, 2014 8:29 am, edited 1 time in total.
Reason: Future Spoilers
Top

Agito wasn't a cop. He was a freeloader manservant. Kuuga worked at a coffee shop along with Den-O. Decade was a bum along with OOO.

Decade has actually been:

-A cop
-A violinist
-A lawyer
-A journalist

And some other odd jobs.

Not to mention a (failure) photographer.
Top

takenoko wrote:Man, I sure wish people would stop using Micchy with a y. It looks weird to me since it's an unnecessary westernization of a Japanese name.

Tell me about it. It drives me nuts. That's how powerful subs are and fan-created names (no matter how stupid or inane) will pervade the public consciousness. That's why I was so against Onrac or whatever it was.
Video Reviewer of Anime Figures, Mecha and Merchandise. (￣‿‿￣)
- Channel - Blog
Top

Damn Mitsuzane! You make it harder to defend you with every new episode. I started out hating him because he felt wimpy and annoying but somehow he grew on me. He's trying to control everything in his life so people and people around him(at least it started that way) could be happy. He's trying so hard to do "right" that he's became crazy. I feel for him but he's quickly becoming irredeemable.

I like Duke's design. But that bow doesn't suit him. He looks like he'd wield Excalibur. Or at least a tweaked Sonic Arrow that looks like a broadsword.
Like a lot of you have been saying. Takatora is definitely coming back. He's probably still has the Sengoku Driver and we're gonna get to see Melon Arms again.

Something that piques my interest is how much power the Genesis Driver really gives the user. Mitsuzane wasn't extremely strong as Ryugen but as Shin Zangetsu he's seemed to improve quite a bit even his style is drastically different. While with Kaito and his Lemon Energy Arms he just seemed to change his weapon and still fight pretty much the same. Then we have Kouta who is still cranking out power with his Sengoku Driver. It seems like he's the only one who can draw out more power from his Driver compared to every one else who is stuck within the limits of whatever model they have. Sure he's the main character but I wonder if there is an actual explanation for that.
Top

I had been wondering for a while now how they'd force Takatora to go back to his original Zangetsu. He of our four 'mains' was the outlier for some time now. Hear me out, aside from the occasional dramatic transformation, Kouta, Kaito, and Micchi still often used their based forms, IE the orange, banana, and grape arms. But ever since Takatora had gotten the genesis driver, we haven't seen hide nor hair of the simple and dramatic melon arms, just Melon Energy. Though we're starting to get that with Kaito as well now that he's been given a genesis driver himself... Rather surprised that Kaito hasn't attempted to mod his Sengoku Driver yet to go the Jimber route since it seems to give a wider array of powers and abilities.
READING TOO MUCH INTO THINGS![/size] including random over analysis rants on pop culture, and Tokusatsu series reviews, if Toei gets off my back for long enough. Also follow on twitter @R2TMIT, or facebook.com/R2TMIT
Top

I guess Sid is the Ouja in this series sans the fighting power. Only maddening laugh and prettey much "what the hell, man?" moments. With a stylish bowler. Did I mention that the bowler hat is called "Melon" hat in Germany? Pretty ironic.

Why did Kaito have his Sengoku driver on when he confronted Micchi?

Also, like everyone else, really hope Takatora's coming back. He probably is, because I don't think we've seen pictures of his actor getting a farewell bouquet, so there's sure to be more of him down the track.
Top

Revorse wrote:Something that piques my interest is how much power the Genesis Driver really gives the user. Mitsuzane wasn't extremely strong as Ryugen but as Shin Zangetsu he's seemed to improve quite a bit even his style is drastically different. While with Kaito and his Lemon Energy Arms he just seemed to change his weapon and still fight pretty much the same. Then we have Kouta who is still cranking out power with his Sengoku Driver. It seems like he's the only one who can draw out more power from his Driver compared to every one else who is stuck within the limits of whatever model they have. Sure he's the main character but I wonder if there is an actual explanation for that.

This question is pondering a lot around the fandom too. Guess it can be analyzed here. Mitsuzane as Shin Zangetsu indeed does improve because as stated by Kaito during Baron Lemon Energy Arms debut, the Genesis Driver seemed to be on a whole different level compared to Sengoku Driver. That Baron went on to get on even footing against Demushu, while before he was getting a good spanking by Demushu with Mango Arms. That just shows how much different level the Genesis and Sengoku are. Onto Mitsuzane's style however, it doesn't get drastically different much. Remember he was using Budou Arms as his main form with the gun as the only weapon available. By Shin Zangetsu, he's using a bow which with gun is classified as a long range weapon. Only a minor tweak in his style happens. Plus Takatora as Shin Zangetsu is quite different with Mitsuzane since Takatora's fighting style is confrontational duel while Mitsuzane's relies on evasive and counter. You can compare it yourself.

I suspect if Oren sees the Shin Zangetsu now, he will know immediately it wasn't the same guy since Mitsuzane clearly lacks the 'elegance of the swan'. lol

Kouta does crank his Sengoku Driver's power a lot. However, it was from the help of Genesis Core that help him improve at the start. While everyone else is stuck in the confine of the model, Kouta has taken it up a notch himself by experiencing with the MIX. Plus, when it seemed he was giving up, he get a major upgrade in the form of a Lockseed that WASN'T made in Helheim, but from the Earth itself. That's the huge difference that makes him stand out more.

I had a thought that perhaps Takatora could be saved by the Overlords, like Sagara or maybe the Lord Overlord decides he wants to talk to one of these monkey-things running around his forest.

Kaito going out on a limb and offering cryptic advice which Kouta will totally fail to recognize. Damn, son, you're a big softy after all! :3