Alt Title: It's a Christmas miracle!

I actually liked this a lot. It was well balance, there were a lot of nice character moments. There was good action. This is literally all I want from you Ryusoulger.

Has DokiDoki Pizza showed up in Sentai before? Is that where Hanto worked before he joined the Go-Ongers?

Mr. Toei, please give Sailor Mars and Sailor Mercury too so we can have a full set

Luna, can you give an explanation for what the Christmas things are getting turned into?

LOL, even Canalo's underage sister has more game than him

Good ep, so I'll overlook how dumb it is that they need to know the Minusaur's creator is a magician to destroy the wand

Hey I actually enjoyed this episode? Possibly because it was mostly about Bamba and Asuna but I always like the farce episodes. It was a lot of fun and good jokes and I didn't want to beat my head against a wall.

Plus the in-jokes with Venus and the Kupi plushie! I literally went "OH MY GOD" out loud when I saw that thing. I can't believe they still had one in storage somewhere.

Oh my gosh, Artemis too! I didn't catch that first time around.
Top

The Sailor Moon references were incredible, thank you Mr. Toei. (Imagine being the employee that was told to fetch Kupi and Artemis from storage? Wow.)

Bamba being shy around the girl he likes despite being several hundreds of years old and apparently having done the relationship circuit before (judging by the ep with the old woman he was visiting) is very cute. Melto stumbling into it was also enjoyable.

The rest of the episode itself was middling to okay. Kleon is getting more bold in how he talks and shows up Gachileus/Wiseru. Why did they need to know the person was a magician in order to destroy the wand? The Minusaur is literally standing there shouting "magi", dudes.

Pics or it didn't happen
http://takkynoko.tumblr.com/ My new blog 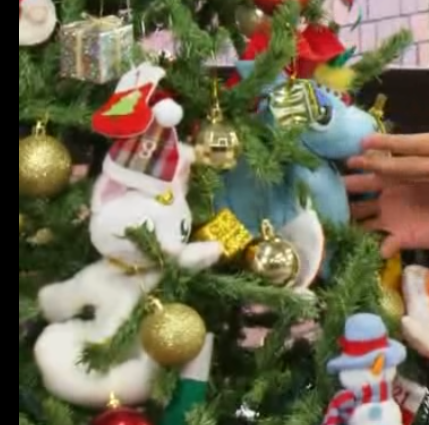 I spy with my little eye... 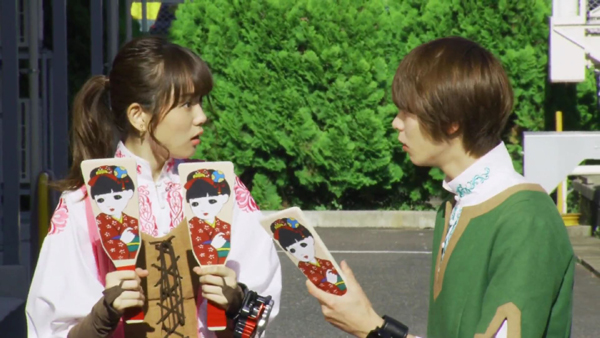 A hagoita is a wooden paddle used in "hanetsuki", a traditional New Year's game that resembles badminton, though played without a net. The game is over 1300 years old and originally was supposed to strike away bad luck. In recent years most people don't actually play the game, so the hagoita are mostly used as decorations. 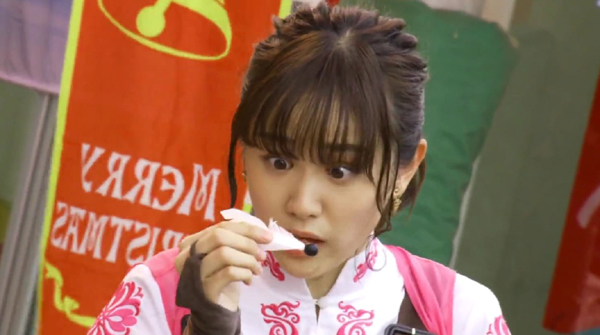 The hane used in hanetsuki, the shuttlecock. 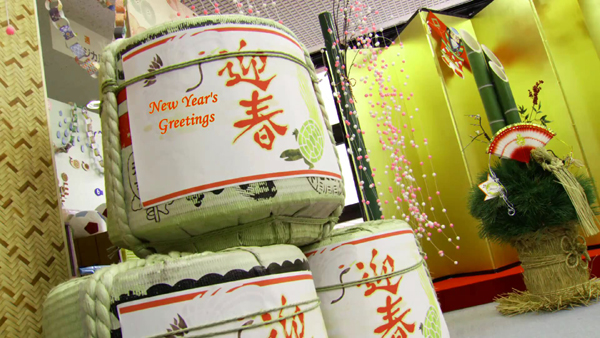 Kadomatsu are displays of bamboo, with pine and plum tree branches. The pine is a symbol of long life.

Mochibana are pieces of sticky rice mochi colored pink or white stuck on a bare tree branch to imitate blossoms and the coming of spring. Most families just buy the lightweight cheap styrofoam-y balls sold most everywhere since it's far easier and looks better. Plus you can do lots of other colors that way as well.

I'm sure there's an actual reason behind the big barrel of sake, but mostly it's cause everyone loves alcohol. I mean it's basically the same as popping a champagne bottle. 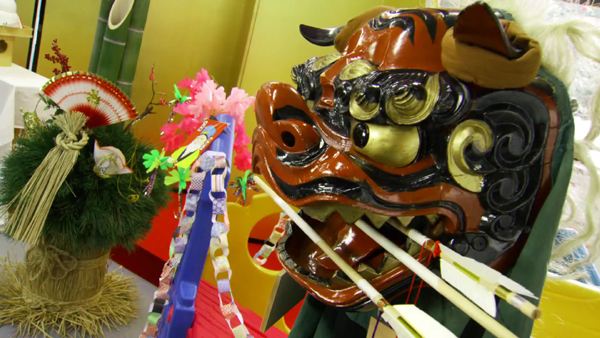 Shishi-mai or "lion dance" is traditional to do around New Year's in certain areas. Getting "bitten" on the head drives away bad luck.

The arrows the lion has in its mouth ward off bad luck. People go to their local shrine New Year's Eve/Day and buy protective charms for the coming year, returning the old ones to be ceremonially burned. Technically they "expire" after a year since they soak up all the bad luck and won't work anymore, but I'll be honest, I've kept some that are really pretty or were from an interesting shrine.

The karuta card in the center is a traditional New Year's game where someone starts to read the start of a poem and you have to find the card that matches. This can get quite competitive. 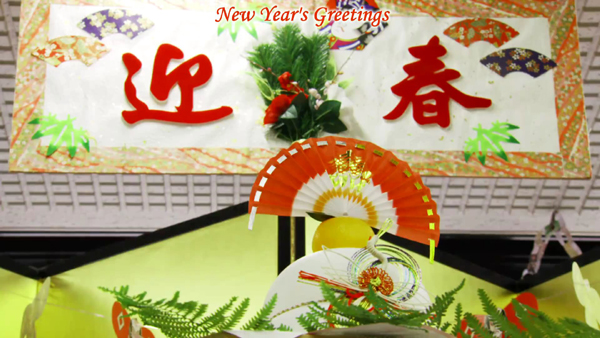 The traditional New Year's greeting is 迎春 (geishun), although it's important to note that this is written rather than said. Literally the kanji mean "welcome spring". Incidentally if it's before New Year's, you say よいお年を (yoi otoshi wo) "Have a good year", whereas once it hits midnight on the first, you say 明けましておめでとう (akemashite omedetou) "congratulations on beginning the new year" or if you're cool and hip you say あけおめ (ake ome).

Kagamimochi is two (or three in some regions) rounded mochi cakes, one smaller atop the larger, with an orange on the top. It's a traditional symbol of New Year's, although most people get the plastic molded ones cause mochi is a pain in the arse to make. The displays range from the conventional mochi to the more modern. I personally have a little white Totoro statue with an orange on its head that I display around New Year's. Mochi is usually eaten around the New Year but it is INCREDIBLY glutenous and hard to swallow so there are several incidents or even deaths each year involving old people choking on their mochi. 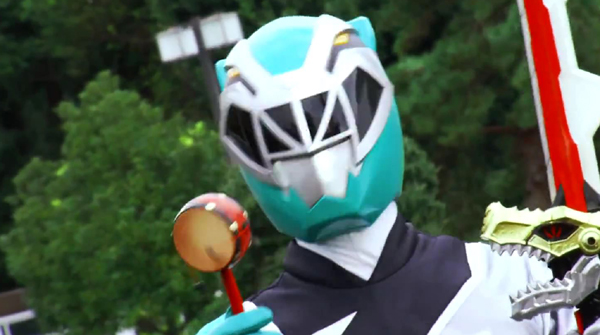 Denden daiko are little hand drums that you twirl around and the beads on either side beat the drum. They're popular toys for babies but honestly I don't think I've ever seen them as holiday decoration? They're pretty old/traditional though.

This might be the most fun I've had with the show in a long while. A really good mix of memorable action, quirky plots and funny scenes. Particular mention of great action goes to Asuna demolishing the Minusaur with her bare hands, and both occasions of Banba going wild on the mooks.

Also one of the generals die in this episode and... it's surprisingly not treated as much of a big deal by the show? Granted, I don't actually think it was either, so I guess it's good that they didn't try to linger on it? Maybe that's not a good thing... I hope mecha combinations other than the big 'ultimate' one can have some spotlight moments before the show ends.

He did. Back in episode 16, he got killed when Cantaloupe fought him in that underwater fight. He only came back through some BS about how his soul escaped to space or whatever.
Top

God I love Bamba. In a better world, Kishida Tatsuya would be a series lead. He totally has the chops for it.

This is a very Bamba-focused episode, and it's made all the better for it. What's the best way to tick off an old-school, stoic Sentai member? Threaten Christmas. It definitely is a bit of a self-parody at times rather than being played straight, but it fits Bamba's personality to a T. And Asuna got some good moments in here as well; she's also a bit of a parody here as the gluttonous Pink, and it works well.

Better still, since it's the second episode of a block, it means Sakamoto directed this one as well. If after the previous episode you found yourself saying "But Koichi, there was almost no focus on the legs/kicking in the last episode. Where are the leg shots?" then this episode certainly tried its hardest to make up for that.

But better still, it means we got a lot of untransformed fighting with Bamba, which is fantastic, because his actor is clearly the best stunt fighter of the group. Letting Sakamoto direct a Bamba focus episode was a really good idea.

On which note, can you believe that this episode has the same writer and director as the previous episode? It just goes to show how detrimental executive/Bandai meddling can be in a series. This is likely to end up as one of the highest voted episodes of the series, even though it's mostly a filler episode.

Of course, it helps that the jokes in this episode were so good - and that they work as western humor as well. I could rattle off a dozen gags, but the dinosaurs talking about eating Santa was especially tasty. Also, Canolo, we feel for you; we too get that face whenever Oto and Melto are brought up.

And is it me, or is Wiseru in a particularly good mood for someone without a heart?

The series as a whole wouldn't work if all of the episodes were like this. But as a one-off seasonal episode, it's definitely a highlight of Ryusoulger's run.


LOL, even Canalo's underage sister has more game than him

I had never thought of it like that before; you've gone and made Oto/Melto even creepier than it was before.

Go-On Macaroni wrote: ↑Wed Dec 25, 2019 9:50 am He did. Back in episode 16, he got killed when Cantaloupe fought him in that underwater fight. He only came back through some BS about how his soul escaped to space or whatever.

Get it right: he withdrew!

BreadToku wrote: ↑Wed Dec 25, 2019 5:36 am Also one of the generals die in this episode and... it's surprisingly not treated as much of a big deal by the show? Granted, I don't actually think it was either, so I guess it's good that they didn't try to linger on it? Maybe that's not a good thing...

I had the same thought as well. It's kind of weird to kill off a general in an otherwise lighthearted Christmas episode. But it seems to work here? Gachi was a one-note general who has been around for about half the series now, and the show has done a good job of establishing that he was going to be done for if he didn't defeat the Ryusoulgers by now.

Thank you for the extensive cultural explanation, Luna.

ViRGE wrote: ↑Thu Dec 26, 2019 7:42 amI had never thought of it like that before; you've gone and made Oto/Melto even creepier than it was before.

I do not understand the people who find Oto's crush weird. She's a young girl (The actress is 12/13 and I think Oto's meant to be a similar age in Ryusoul Tribe terms) who has a crush on an older boy. If you think that's weird, you clearly don't remember what it was like to be that age. It's not like Melt's returning her advances. In fact if anything he seems to be blissfully unaware of it.
Seen:
Super Sentai: Zyuranger-GoGoV, Abaranger onwards.
Kamen Rider: Ichigou-Stronger, and all the Heisei/Reiwa series except the American shows.
Precure: DokiDoki-Go Pri
Metal Heroes: Gavan

"Yes, officer, she is in fact 120 years old. Never mind the fact that she's playing with those other kids and is prepubescent by our species standards.

Also, technically she is pursuing me, so I'm not the one at fault here."

When Melto gets picked up by the pedo police
http://takkynoko.tumblr.com/ My new blog

Melto is definitely aware of it, but he's actually handling it gracefully by 1) never acknowledging her advances/overtures, and 2) acting like a big brother instead.

Honestly, being a girl irl, I totally understand the whole having a crush on an older boy thing. The only thing creepy about this is that they're trying to sell the stereotypical "oh no she's totally Mature and Old even though she looks and acts 12" anime trope...

Is it just me, or was this the first episode in the whole series without any mentionable focus on Koh whatsoever?
Last edited by msf232 on Fri Dec 27, 2019 11:09 am, edited 1 time in total.
Finished:
Dairanger, Shinkenger, Kyoryuger-Ryusoulger
Kuuga-ゼロワン
Nexus, R/B
Ryukendo, Rescue Force
スパイダーマン
CH THE LIVE
Akibaranger, Akiba S痛

Far from the first. For all the (rightful) complaints that Red has been hogging the merchandise and spotlight, it's really only built up over time to become a recent problem.