Hmmm, I'm feeling pretty suspicious of Yodonna being a product of fan feedback. Maybe they heard fans wanted a human commander and took inspiration from Is from Zero-One? Anyway, welcome back lady enemy commanders, it's been a while

Disappointed there's no visual difference to the powered-up Bechats, guess that saves them some money though

First Sayo and now Yodonna, someone's really into S&M this time around

So what do we all think of Yodonna's tongue? Feels like we'll be seeing a lot of it

I liked this episode. Yodonna was obviously a bad guy from the beginning, but that made it more intriguing to see what was going on with her? It's also exciting to have a new villain to see what her dynamic will be like with Krunchy and Galzy. I also like that there seems to be something going on between her and Tame. More Tame time is always good

Edit: Oh, Yodonna is played by Shuka from Versus Road? Neat!

Edit edit: Read some criticism of Kimura Subaru, the voice actor for this week's monster of the week

Ichiros seiyuu, Kimura Subaru, has done blackface before and also mocked lip plates, and I think he's done some dodgy tiktoks too and he blocks people who call him out on twitter. The rest of the hypmic seiyuus are fine from my understanding, it's just him that's :/ dodgy so it's unfortunate that they use him for most promo events and stuff. It's not really that well known because people don't talk about it a lot outside of twitter

Does anyone know anything more about this?
http://takkynoko.tumblr.com/ My new blog

Huh, that episode was kind of all over the place. There are some bits that definitely have me excited, but it's all mixed up in a rather unfocused 22 minutes.

The immediate takeaway is that we have a new enemy commander. An actual face actress, no less! The last time we got a face villain as a regular was what, ToQger with Zett? It's been a long, long damn time, to say the least. So I'm excited!

The villains have easily been the weakest aspect of Kiramager thus far. Other than a few episodes developing Garuza and his face-heel-turn, the Yodom army has been little more than fodder for the Kiramagers to beat every week. They haven't really done anything or executed any grand plans, and largely get used for comedic purposes. Which, suffice it to say, does not help to sell this group as some kind of world-ending threat.

Having another commander is the show's big chance to upgrade the Yodom army into something that's a real threat, amping up the stakes for everyone involved. Not that I think this show is suddenly going to go on a bender of being serious all the time - it's clearly a comedy Sentai - but it's my hope that this means the show can find a better balance than what they've had thus far. Having a face villain could be especially interesting, as now we (finally) have someone on the villain side who can be a complete individual when it comes to acting and emoting. My only concern there is that they've given Yodonna a very cold personality type, so I hope that doesn't keep them from fully leveraging the strengths of a face actress.

Unfortunately, an important face villain introduction episode has been glued to an episode doing half a dozen other things in the process. So the show has to juggle her introduction with finding (and losing) yet another dragon ball, another monstone, and I guess this is a Tametomo focus episode as well? The last bit was especially painful; I have an inkling of what the writers may have been going for, but it didn't work. Not only is this a case of Tametomo being stupid because the plot seemingly requires it - so it doesn't really build on his character at all - but it's arguable that the plot needed a love-struck Tametomo at all. Nothing he does moves the plot forward, and it's like the writers shoehorned it in because they had to.

Meanwhile, Yodonna's big evil plan is to... open another dark portal? I like the sheer menace of using bombs to do it. But as an evil plan it's kind of weak when that's the same thing Tweedle Dee and Tweedle Dum have been trying to do for the last two-dozen episodes. I suppose I'm being fussy, but it's not really the kind of elaborate, evil plan befitting of a new commander.

Finally, the Yodom Changer is back. You didn't think Bandai forgot about that one, did you?

On the whole, I'm excited about the possibilities a new face villain will bring. But this episode isn't an especially impressive introduction for her.

I had the same gut feeling while watching the episode. The year-round nature of the show and modest lead-time means that it's often hard to determine when something is happening because it's the planned end of an arc, and when it's the creative staff calling an audible after seeing the initial response to the show. I think Kiramager will benefit greatly from a face villain, but there's this piece of me that wonders if this is meant to be a mid-series retool of sorts.


Disappointed there's no visual difference to the powered-up Bechats, guess that saves them some money though

Agreed. I have to assume they're just going to become a pushover - because otherwise the Kiramagers would never be able to get to defeating the MOTW - but even a small change in appearance would have gone a long way here in underscoring their renewed threat.


First Sayo and now Yodonna, someone's really into S&M this time around

This week's twisted moral: embrace the leather and lace?

So what do we all think of Yodonna's tongue? Feels like we'll be seeing a lot of it

It's certainly very, uh, direct? I'm sure the cast and crew have cracked up more than a few times filming that. But it's a very forced action; it doesn't feel like something the character would actually do. Regardless, we're definitely going to be seeing a lot of it.
Top

Good episode but not as "WTF" as it normally is so I was partially disappointed, but the fact that Yodonna is all dominatrixy while having that tongue trait that Ghirahim also has made it a thousand time better IMO. As for the "Zombie Bechats", the solution to them is super obvious to anyone that's played/watched/read ANYTHING with zombies in it. YOU GO FOR THE FAKING HEAD YOU IDIOTS, I mean you would think that Tametomo or Shiguru would have known that. Gonna be interesting to see if that's how you stop them in the end xD

When was the last time we had the classic female general that wasn't a voiced monster suit? Go-Onger? I'm loving that they've decided to lean into some of the older Sentai cliches. Nice to have another antagonist to prop the bad guys up as well. Poor Tame.
Top

I've passively deleted everything about Go-Busters other than Jin and J.
Top

I think it has been enough episodes, so after this two episode arc they should have Yodonna corrupt(?) Red's classmate into being bad so that Red has to defeat Yodonna without hurting the classmate. (Of course the punch line of the episode would be Red's classmate turning on Yodonna saying that she was already a bad girl so Yodonna's negative energy had no effect on her personality.)

Will they have an episode in the future where Yodonna makes the Kiramagers fight to the death in a VR world?
Top

I wonder if the "Shuka" form is a one time thing or if we'll see it again in the future. It seems to need less preparation so they might want to use it again. Not a fan of the tongue thing but otherwise, I like the new commander, but to be fair, I like everything about Kiramager for now (to various degrees) . Not that I didn't liked the Sentai before it, but I like his one even more than the others.
So it's the second Versus Road actor to appear in a recent Toku. There seems to be a lot of actors exchanges between Garo and Toei, maybe those who played in Toku are more likely to play in others Toku? Or maybe I'm just imagining things.
Top

I feel like Garo stuff is filmed way in advance. Like it feels like they film the Garo stuff and then release it like a year later. So it wouldn't be surprising if they finish filming Garo, have some free time to look for a new role, and Toei grabs them after Garo airs? Think that timing works in my head?
http://takkynoko.tumblr.com/ My new blog

I knew I recognised her.
Top

takenoko wrote: ↑Sun Oct 04, 2020 6:15 pm I feel like Garo stuff is filmed way in advance. Like it feels like they film the Garo stuff and then release it like a year later. So it wouldn't be surprising if they finish filming Garo, have some free time to look for a new role, and Toei grabs them after Garo airs? Think that timing works in my head?

Probably, considering the amount of CGI and others post-production stuffs needed, but it's not really what I was talking about. I was talking about staying in the same genre, or something like that. I remember most of the cast of Garo Yami being Toku alumni, with one who would play in Gaim after that.
Top

This was by far my favorite Kiramager episode. The old fashion look of Yodonna is a very welcome plus. She reminded me a lot of Neffer, from Flashman (1986 sentai).

Some people had som pretty harsh things to say about this episode. About being polluted with other things not related to the central story, I partly agree. Having Juruu remembering some place from his childhood and finding some random priest was completely useless to the story, and only made the viewer's imagination drift from them main point. However, I don't agree that having Tametomo having a crush on her was useless. That can be a cliffhanger for many more interest points in future episodes.

Looking foreword to see how she behaves with the rest of the villains. And why the hell she has a Kiramei Changer.

Besides, we should do a poll:
Do you want to see Yodonna beat the crap out of Garza and Carantula?
1- Yes
2- Of course
3- Why not?
Top

Zerato wrote: ↑Thu Oct 08, 2020 8:53 pm Yeesh, the Monstone costume has seen better days. It's not often that you see very obvious damage on the costumes.

Oh wow. You're right. The crotch is totally going out. 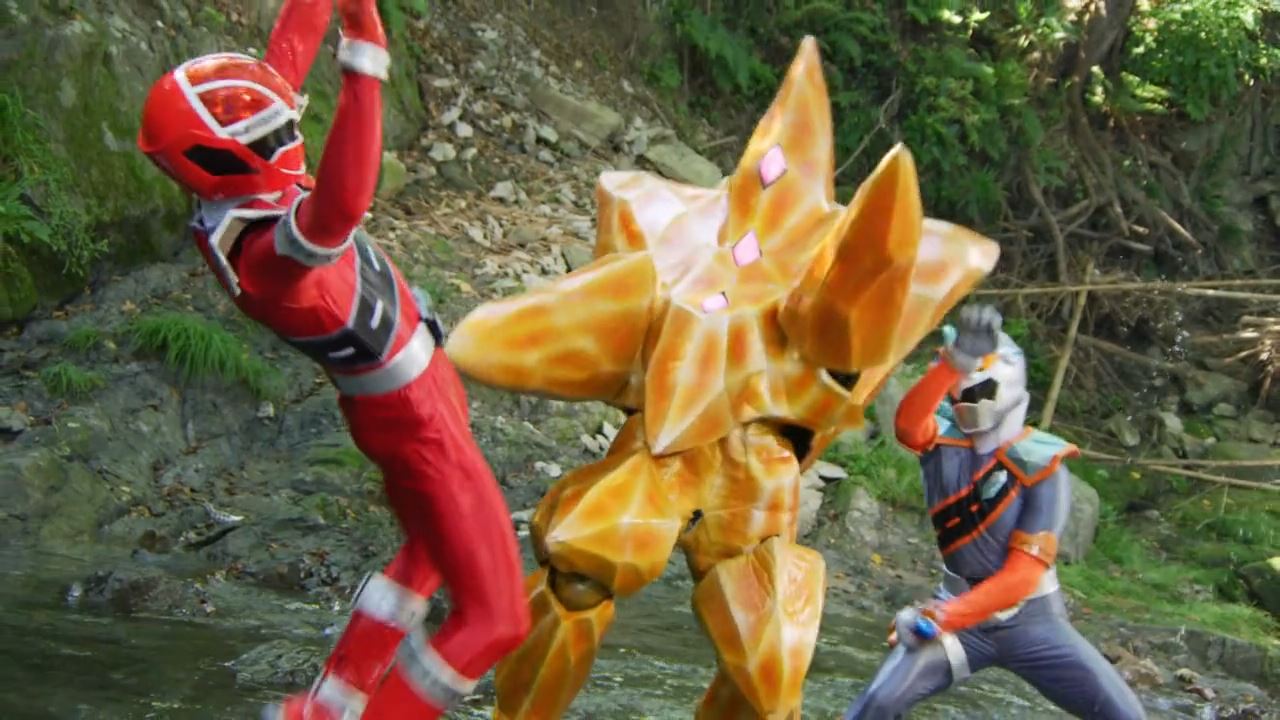 I wonder how the suit actor sees anything beneath that costume! There now holes for the eyes!
Top
Post Reply
30 posts