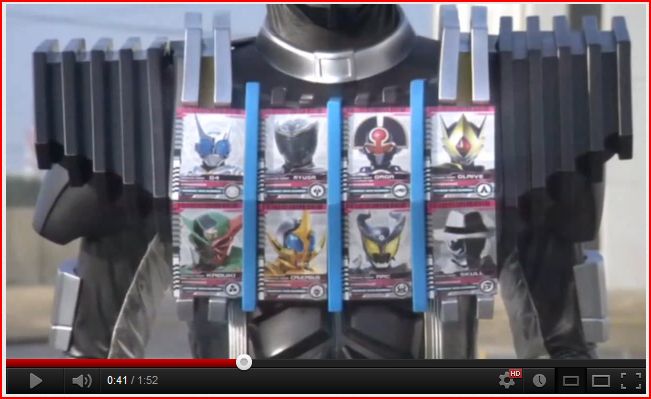 I dunno, there seems to be a lot of 'proof' that it's Orga but, it just doesn't feel like it matches with the Rider's appearance. It feels like it would fit better with an ogre or oni look. Oga though, It has more of a, kingly feel to the king look of the Rider, with his broadsword and royal looking cape... But hey that's me and my limited knowledge of the Japanese language.
READING TOO MUCH INTO THINGS![/size] including random over analysis rants on pop culture, and Tokusatsu series reviews, if Toei gets off my back for long enough. Also follow on twitter @R2TMIT, or facebook.com/R2TMIT
Top

And to Solidus: Have some Axel!
http://www.geocities.jp/bookend_ohgai_7073/axel.html
http://takkynoko.tumblr.com/ My new blog

That head...I find it funny, disturbing and then funny again. In that order.
Top

Apologies for posting in a somewhat dead topic, but I was just going through a couple of Japanese dictionaries for class and I noticed that the only other English words that corresponded to the katakana オーガ (that began with an o) was organize (and derivatives like organization and organizer), orgasm, organic, etc... and Ogre.

However, it's interesting to note that almost all the English words that オーガ romanize to are words that are spelt with an 'r' to represent the long vowel in English (though you don't pronounce the r in any of those words).

Perhaps when deciding the English name for the character オーガ, whoever was in charge just took the most common spelling representation of the long vowel 'オー' in English, this being 'or', hence Orga.

In this case, it's an English romanization of a name created in Japanese, which is strangely named in and of itself. So I question if it needs to make sense in English as well. This is unlike Unkh, which is a romanization of a Japanese katakana equivalent of an English word, Ankh, to begin with. Not to mention, this was corrected in later releases of the figure.

So, technically, Orga, while not the only way to romanize the name, isn't necessarily wrong. Other ways would be O-ga, Ouga, etc... Which I see as being equally correct. But all the other official romanised names from Faiz (Faizu) to Psyga (Saiga) are already used, so why not Orga (O-ga)?

(In a similar vein, interestingly enough, why was ライト not Right (or Light if you want to go all Death Note) but Raito? Wouldn't that make more sense in English as well? Or hell, why not Wright?)

But in the end, I guess it is indeed up to the individual's preference and take on things. Apologies if this sounded like a rant. Just some questions and speculation that I wanted to get off my chest. Japanese names are a bit** to romanize.
Video Reviewer of Anime Figures, Mecha and Merchandise. (￣‿‿￣)
- Channel - Blog
Top
Post Reply
35 posts