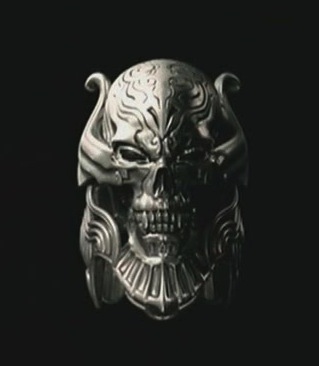 Ok I'm a huge fan of the creativity and thought behind every horror. Which one would you say is your favorite. It could be for a number of reasons. Most imaginative, most creepy, most powerful. Mine had to have been:

Asmodai (アスモディ Asumodi): Named after a demon and governor of Hell, known for manipulating the lustful nature of humans. A clown-like Horror who possessed the body of a pierrot. Using his red clown nose and his sentient hand-puppets, Asmodai forces his victims to show their "true nature", who turn violent and kill each other. Once they are dead, he turns them into beach balls to ingest. He is giant-sized in his true form, using his arms for locomotion. He attempted to take control of Kouga in a similar fashion as his victims, but was killed when Zero lopped off his red nose.

I like it because it was pretty creative yet very creepy. I just like twisted stuff for some reason. It was a very entertaining episode for me.
Top

Pazuzu is definitely one, as his episode brings to light just how scary things can be in a hospital environment. I found that episode to be the creepiest because it can be somewhat realistic in that you never know if a doctor is a psycho/quack with the possibility that they might kill you.

My truest favorite is Moloch. I was seduced by the sadness of love loss of this story. The girl was killing men and collecting their fingers in a macabre attempt to recreate the perfect pianist fingers for her deceased boyfriend. Throw in the horror raping her and then possessing her for the ultimate terrifying experience. The metaphor in this episode shows that a person can become mad with grief, and that others (in this case the horror) will take advantage of someone in a weakened state.
Inspire.
Top

I agree with everything you said. Did you know that the doctor from season 1 is actually in season 3 as a doctor too? You have to pay attention and they make cameo's. It was a short scene but was cool to see.

Another horror that is really growing on me is Rivera from season 3 (Kumi Imura is her real name). The news reporter. She's starting to grow on me as a villain. Great actress.
Top
Post Reply
3 posts • Page 1 of 1