I was looking through the forum trying to find a thread that might've already been created for Garo Project, but didn't find any, so I decided to created one.

I'm sure alot of you here who have been in the Garo fandom for quite some time now know about the Garo Project band that was formed in 2006. But for anyone who don't know them, Garo Project were a temporary music band formed in 2006 that consisted of the actors from the first season; Konishi Hiroki (Kouga), Hijii Mika (Kaoru), Fujita Ray (Rei/Zero), Kyomoto Masaki (Kiba/Barago), and Watanabe Hiroyuki (Saejima Taiga). Both Konishi & Fujita were the main vocalists in the band, while Mika was a backup vocalist, Watanabe played the drums, and Kyomoto was the producer, lyricist and composer for all their songs. As a band, they sang the ending themesongs for the first season & Byakuya no Maju, and had released 2 singles together in 2006 and that's it, before they disbanded.

Here are all the songs from the band, they're all so beautiful! I love them all!

Aurora no Shita de:
http://www.youtube.com/watch?v=O-31waD9X7k
unlike all the band's other songs which Mika only sang the choruses, she actually had her own lines in this song.

They're all really good singers (except Watanabe), I really like Konishi's slightly husky vocals and Ray's deep voice, and Mika's vocals were surprisingly good too, she's got a unique deep voice. Even though Kyomoto produced, wrote & composed all of the band's songs, he himself never provided his vocals in any of the songs, but he's got a good voice too, he's a veteran musician in the Japanese music industry. Not much to comment on Watanabe though, you can't even hear his voice in the songs since he was only a backup singer and he's mainly the drummist.

And here are some images of the band: 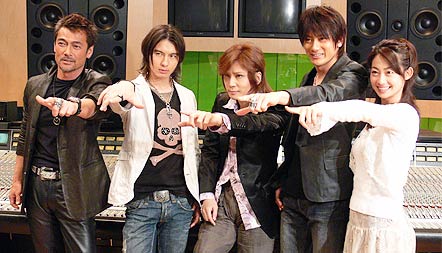 Why did I decide to create a thread for them even though it's been 7 years since they disbanded? Because all their songs are so damn beautiful and awesome! So much so that's it's such a pity that they only lasted for such a short period of time...I understand that they were only created to promote the first season, but I really miss this band! I think they could've revived the band to promote Makai Senki, Konishi, Mika and Fujita would've been no problem to reunite for the revival. And even though both Kyomoto and Watanabe only appeared in season 1 and not any of the subsequent Garo works so there's no reason for them to return, but I think Kyomoto could've still be able to write and produce songs for the band, and by extension, Makai Senki.

To be honest, I actually wish that the band had continued on and sang all the themesongs for all the subsequent Garo productions instead of JAM Project, I think I've said before that I don't really like JAM Project, and don't particularly like any of their songs either. It would've been so great if Garo Project had sang all the themesongs for all the other Garo works too.

What do you guys think about the Garo Project band? Their songs? and any guesses as to why they chose not to revive the band?
Top

I remember that I laughed so hard when I saw Akai Bara PV. After watching Garo 1st Season, watching Kouga singing with that serious face, Rei rapping and Barago with a spanish guitar, it was so lol.

But yeah, the song are not bad, though for me are not even near to JAM Project level.
Top

Well I guess you can't really compare both bands based on their music because they both have different music styles...JAM Project is all rock and upbeat, while Garo Project's songs are all ballads and melodramatic.

While I love ballads, and Garo Project's songs are so beautiful overall, beautiful and deep lyrics, and the compositions are very good and relaxing to listen to and more consistent with their type of music.
Top

I am the kind of fan who actually sings the openings XD, and I enjoy screaming GAROOOOO at the end of them. With a ballad you can't accomplish that sense of epicness that JAM Project's songs give you at the beginning.
Top

it just depends on personal preference. frankly I'm not that into loud rock music all that much anyway...but even said that, I've heard some rock songs in the past which had better compositions, they were loud, they were upbeat, but the music sounded more consistent. But with JAM project's songs, sure they're loud, they're upbeat and the lyrics are good, but the compositions just sounds messy and inconsistent...they don't sound very pleasant to my ears...the only song of theirs that even comes close is 'Waga Na wa Garo'. And it's even worse when the composition for their songs don't even fit into the opening credits. The only song from JAM Project that I thought actually suited the opening was 'Waga Na wa Garo' in Makai Senki.

to each their own.
Top

I always wanted to sub the Akai Bara mv, but never found a raw that was good quality.
http://takkynoko.tumblr.com/ My new blog

yeah for some reason it's so hard to find a good quality pv video for Akai Bara, whereas the pvs for the other songs in good quality are easy to find.

Another thing I love about Garo Project's songs is that their songs have these old 1990's music beats & tunes in the compositions, which is very rare to find in 21st century music nowadays...but the bad quality videos of the Akai Bara pv just makes that song feel even more vintage. Not that it's a bad thing because I actually really like this 90's style music tunes in their songs, it gives their songs a more unique style in this day and age.
Top

takenoko wrote:I always wanted to sub the Akai Bara mv, but never found a raw that was good quality.

Hey I got the bonus DVD from my friend.. But the contain might be slightly old and hope there's no scratches on them... Maybe I should try rip them first if the video still good to be view