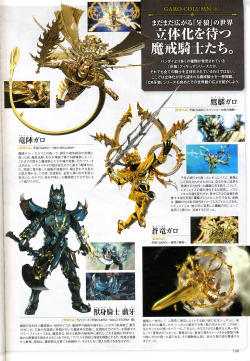 List of Knights with no figure yet. Including a slightly female one?

If you click on my blog link at the top, you can see a list of knights in their human form, lists of horrors, list of toys released.

The red "slightly female" one is a "female" Makai Knight, named Yaiba. "She" is from the pachinko game. The same game, in fact, where Giga/Daigo debuted long before he showed up in Gold Storm.

I say "female" because it is the owner can change the gender appearance of the armour. So, I guess technically because of the Yin rules, Yaiba is a man, but appears as a woman.
Top 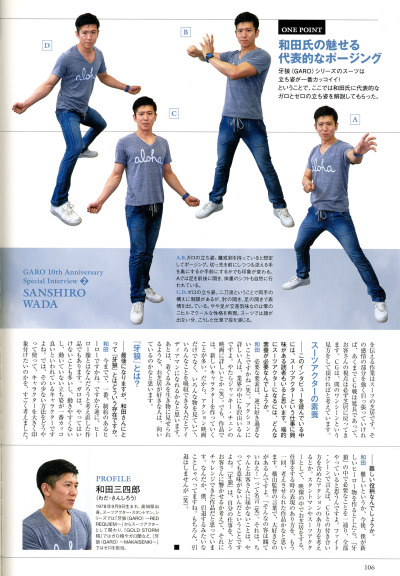 Whoa! This book is amazing! Where can I order this at?

I got it from Amazon Japan.
http://takkynoko.tumblr.com/ My new blog

Thanks! I've just created an account on Amazon Japan and found the Kamen Rider Mach, W, Gaim, and GARO novels that I've always wanted to check out since there's no scans or translations for them online. I've been interested because all these novels are canon and adds more detail to the story. Especially the GARO novel where it supposedly involves Raiga being born and all that. Question though. Once I receive these books, do you know of any community that would translate them once I scan them? I'd like to help out and share these novels with everyone else if I can. Just point me in the right direction.

Haha, I'd gladly answer any questions about what's going on in the books, but we'd never have the time to translate a book. That'd be an amazing commitment, and we're barely getting done with the projects we HAVE to do (AKA, shows/movies related to the ones we're subbing)

I'd love to know what you thought of the books if you get them though.
http://takkynoko.tumblr.com/ My new blog

What about Garo The Bible? It's a manga, so there's not much text, and, unlike the other two mangas that are just adaptations of the live actions, this one shows stories about Taiga and little Kouga.

It's also a totally different skillset. While we could probably still use the same QCers, we don't have any manga cleaners and frankly, Takenoko is horrible at photoshop XP

We'd prefer to stick to what we're good at.
Top