The winner moves on to the final round!

Edit: Note, you can choose up to 3 options for this poll.
http://takkynoko.tumblr.com/ My new blog

I haven't seen all of these, so I'm probably biased, but I chose the 2 I have seen: Bioman and Liveman. I think the Bioman suits are some of the coolest Sentai team suits of all time, plus I really liked the characters. Liveman has one of the best opening episodes in all of Sentai in my opinion, and I liked those guys a lot as well, except for the tsuika senshi. Bison and Sai didn't do it for me. My 3rd choice was Flashman, because I think their suits look awesome, too. LOL. Plus I like the effects they do over their attacks.
Top

Liveman feels very emotional for me. I'm very satisfied with it. Love the clashing of friends and such. Flashman got cool suit and the awesome Flash Titan. For me Maskman feels rather plain and boring. Blue Mask did not get to defeat the grumpy male general but red Mask did on one to one fight. The ending was totally lame since Red Mask and the princess from the enemy organisation, who were initially lovers by the start of the series, didn't end up together and she chose to stay underground to lead her people.
Top

Bioman and Maskman is the best
Top

Haven't seen anything up to Goggle V yet but for after that?

Kagaku Sentai Dynaman - Explosive action where the staff milk the new spandex outfits for all their worth. The casting is also great, Jyunichi Haruta as DynaBlack, Kougi Unoji as DynaBlue and Sayoko Hagiwara as DynaPink to name a few. Only slight I could think of is that until the last arc, it's pretty episodic but again when you have such balls to the wall action, it's forgivable imo.

Choudenshi Bioman - There's a lot I like in this show but it doesn't quite breach my top 5. Mika and Jun are both good yellows and the story with Doctor Man and Prince is good. I think it misses my top 5 due to a lot of the fights feeling samey? The show having Mecha of the Week and the same general fights are just a bit of a drag, sometimes.

Dengeki Sentai Changeman - Best damn Sentai show. From the casting to the pacing of its great plots, there's a lot it does right and it's gladly #1 in my list. Also, Gyodai has the best motivation ever. He doesn't want to fight and grow monsters, he just wants to go back to his home planet and hang with his buddies.

Choushinsei Flashman - Good show, #3 on my list. While it has similarities to Changeman, there are places it goes and ways the story shapes itself with ideas like the Alien Hunters and Anti-Flash that feels original to its own show... and the franchise for that matter.

Hikari Sentai Maskman - #2 on my list, I'm pretty fond of the star-crossed lovers angle with Takeru and Princess Ial. And how it becomes a 4-way plot with Igam feeling the relationship is a burden to their royal family and eventually Kiros seeing Ial as an object, a treasure that only someone like him can have. The rest of the cast is cool, too. From Akira trying to enjoy his youth to Momoko and Haruka kicking all sorts of butt. It's a fun show.

ChouJyu Sentai Liveman - Has a good message behind it but kinda gets effed with due to production issues and Tweedle-Dee and Tweedle-Dum joining the cast. Still, though, it's worth watching and Yutaka Hirose does awesomely as Doctor Kemp.

Kousoku Sentai TurboRanger - Show that deserves much more love. Look beyond the fairies and cars set-up and you get a show with a message, with heart and soul. How the Bouma being born from grudges gets taken to an extreme with the Wandering Bouma and the final message being that if you just stew in your hatred, you'll end up destroying yourself. Kenta Satou is also da man!
Top

Posts: 4817
Joined: Tue Dec 15, 2009 1:47 pm
Male: Yes
Favorite series: Kyoryuger
2nd Favorite Series: W
Quote: "When I first started, I knew everything about nothing and have progressed in the subsequent two decades, realising that now I know practically nothing about everything"

I've only seen one, which is Liveman. I gets my vote by proxy.
Top

Bioman for nostalgia, it was the first series I've ever seen.
LIveman and Maskman are the best shows of the period so they deserve a vote.

The shows up to Bioman are slowly improving from action show to more drama, so there's no match with the latter ones.
Changeman is very good for that era, Flashman has good ideas but doesn't live up to them in my opinion and Turboranger is just ok.
Top

Flashman and Liveman, two of my favorite series of 80s.
Top

Flashman because I have a special place for things that aired the year I was born, (I know that's strange.) Liveman got my vote because after 2 episodes I was hooked by that story of friends fighting, and I picked JAKQ because it was one of the first Sentai I got to see. That crossover movie with Goranger. And I mean, JAKQs concept I always liked even if it was seen as a flop.
Top 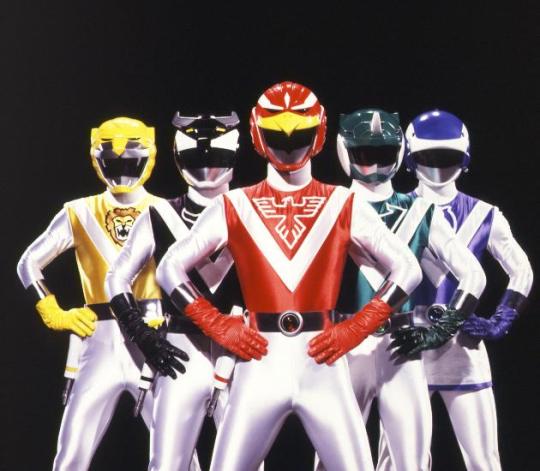