What to watch next?

What to watch next?

I've recently got back into my Sentai after a considerable break (the last one I watched was Magiranger as it was airing, and Deka before that) and Gokaiger's got me hooked again.

Can anyone make a good suggestion for what to watch while I wait for more episodes to air? What's your favourite and why

I fight evil wherever it may be... except in dark, scary places.

Location: on a chair

I started with Magiranger (but you've already seen that one). Near the end of the series I found out Goseiger was airing. I think it was okay, though lots of other people don't really seem to like Goseiger. I started watching Shinkenger recently. That's a very nice season. (Yet I keep forgetting to continue watching it.)
I shouldn't watch Go-onger, it's very childish. I only watched the first episode, but I didn't like it at all. If I want to see talking mecha's, I'll just watch a movie like cars or something (no offense to the people that liked Go-Onger)
Top 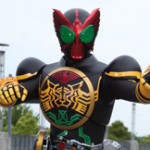 I really liked Shinkenger, you should try that

(for some strange reason I hate Toku girls) For me, Shinkenger had a very good plot and many funny moments without overdoing it

well, since I've only been watching Toku for a year, Shinkenger is the only Sentai on my 'Completed list'... but currently I'm watching Go-onger. True, it is a bit childish from time to time and it took me a while to get used to it but it never fails to make me smile. If you like crazy and goofy humor, you should definitely give it a change!

Almost all of the series between magiranger and gokaigers had good points. If i am not mistaken cronologically it is;

For each. Boukenger and shinkenger are the more serious series among these but both gekiranger and go-onger gets serious after half way (at least thats what I think). You don't feel same tension from goseiger its a little in-between but it has an interesting plot. Watch movies and vs movies of each series if possible first to get a better idea of series before starting them. Watching first couple of episodes maybe mis-leading especially in the case of geki ranger, go-onger and goseigers.

From what TV-Nihon has subbed, I'd recommend:

)
GekiRanger ( I think the last 10 or so eps were kinda meh but the show's pretty good. Watch it for the villains and Gou, if you do try it)
and, ZyuRanger. (Just 'cause the show's starting to get subbed)
Top

I think it was Timeranger that tipped the scale and brought me into the Sentai fandom. Sure my friend showed me some scenes from Go-Onger but I was to judgemental from LATER power rangers. XD sometimes you have to go more mature before you can turn childish.
Top

DrowningFishy wrote:I think it was Timeranger that tipped the scale and brought me into the Sentai fandom. Sure my friend showed me some scenes from Go-Onger but I was to judgemental from LATER power rangers. XD sometimes you have to go more mature before you can turn childish.

I'm of the school that enjoyed Power Rangers Go-Onger adaptation, but I've not watched Go-On to compare yet.

I've settled back to watch Magiranger again, I loved it the first time around and decided a reviewing was in order. It'll give me some time to decide on my next while. I'm getting mixed feelings between Go-Onger and Shinkenger at the minute, both have appeal for different reasons. I love the idea of the Kangi drawing in Shinkenger, but the...I forget the word, but 'talking vehicles' in Go-Onger also amuse me.

I've put Goseiger and Gekiranger on the backburners - something about the footage? Just doesn't look...right. It'll grow on me I'm sure.

Boukenger's being saved for post Gokaiger, let's have the current anniversary done with first

I would suggest Gokaiger, especially if you're a fan of the other sentai shows like Shinkenger and Goseiger.
Top

I would suggest a revisit to Magiranger since it was one of the better ones in my opinion.

Boukenger, and Gekiranger I found enjoyable and would suggest watching them. They had a very good balance between something enjoyable for kids and enjoyable for adults also. I still get a chilll watching the last episode of Gekiranger, by only watching the opening. Its for reasons if you watch the show from the beginning, skipping to it doesn't mean anything. Just a subtle wording, and culmination of a good series. Boukenger starts off a bit 'off', but as they start getting things together really good after they introduce most of the Negatives. Its always nice to see your opponents backstab and fight each other.

I loved Shinkenger, but too me, it brought up the bar of Sentai to a very high level. Much more adult like, at the same time enjoyable by the kids. There is a short 'cross over' with Kamen Rider Decade, and watching those episodes of Decade are helpful. Still, I'm having trouble enjoying the later sentai because it raised the 'bar' for Sentai to me almost to the level of the recent Kamen Riders. So save it a bit later, its kinda like cooking the most delicious meal you had ever had, only to find out you can't just get the recipe right again.

Goseiger didn't impress me either, then again it was coming off of the 'high' that I had from Shinkenger and had that feeling from all the Sentai after it.
People say that the real world isn't black or white, its shades of gray. I prefer to think its a rainbow spectrum, when any color is dark enough, its black, when any color is light enough, its white. Yet, there is a spectrum of cultures and values.
Top

HIDragonstar wrote:Boukenger, and Gekiranger I found enjoyable and would suggest watching them. They had a very good balance between something enjoyable for kids and enjoyable for adults also.

I wouldn't say that about Gekiranger. The ratings for Geki were quite low when it aired because little kids weren't too interested in the Hong Kong Kung Fu movie theme. Adults loved it but kids were indifferent. The low ratings prompted Toei to spend more time on pre-production for Go-Onger so that it would appeal more to kids. Many adults disliked Go-Onger but kids ate it up and toy sales reflected this.

A lot of this is personal preference but most can agree that Goseiger was mediocre. It is a fun watch but when you look back on it, nothing will impress you.
Top

My first series I fully watched was Gekiranger. Definite Watch.

Followed by Shinkenger then Dekaranger.

I do plan on watching Boukenger and Go-Onger I just haven't wanted to.
Top

A heads-up if you're going to watch Goseiger: The whole thing about the rangers being angels? Never really used. There's a piece of background music with some really beautiful choral vocals and there's a little angelic imagery throughout the show, but outside of that the whole "Gosei Angels" thing is just insistent terminology.
And as other people have warned, the writing isn't very good.

And while I think this thread has enough gushing about Shinkenger as-is, I would like to mention that I've watched it three times through, and I don't regret a second of it. I almost want to raise my kids (Assuming I ever have any.) bi-lingual based solely on the fact that it would mean I could watch it with them. I'm with HIDragonstar, it very well may have raised the bar on what a Sentai can be.
Top

another thing about the goseiger: the characters are BORING. the only two or three characters i liked were Datas Nozomu and GoseiKnight. It was painful for me to watch any of the episodes centered on any of the main 5. Even so, the mechas were pretty cool