I like the idea of a Dragon Knight themed sentai, and I'm picturing fancier suits for it than in more recent series. Hopefully we get a good storyline for it, that doesn't spin its wheels for around 20 episodes. (cough LuPat cough!)
Top

Every time I do a search on this upcoming series, I get the Dungeons and Dragons cartoon opening running through my head.

Scans of the catalog got posted:

Those look actually pretty cool? The weapons are clearly modeled after dinosaurs though. Japan, how many times do we have to go through this, dinosaur =/= dragon, I don't care if the jp name translates to "strong dragon"
Top

Why do they use the same color and same theme just within 5 years?
Top

Pretty nice looking. They do look like Dinosaurs more than dragons though.
Top

Blue's weapon is a triceratops and Pink is an ankylodocus, guessing red is T-Rex?

THESE ARE NOT THE DRAGONS I WAS PROMISED TOEI
Top

Why do they use the same color and same theme just within 5 years?

They're trying to mimic Kyoryuger because they're desperate to increase toy sales after poor sales with recent shows.

That said, Kyoryuger's been really over-saturated recently. Between Dino Charge, Kyoryuger Brave and 33.5, it's like Kyoryuger never left.

Hopefully they don't do another big dino crossover, although with Kyoryu Pink retiring that would be harder anyway.
Seen:
Super Sentai: Zyuranger onwards except Hurricanger.
Kamen Rider: Ichigou-Skyrider, and all the Heisei/Reiwa series except the American shows.
Precure: DokiDoki-Go Pri
Metal Heroes: Gavan
Top

Don't forget about the poster 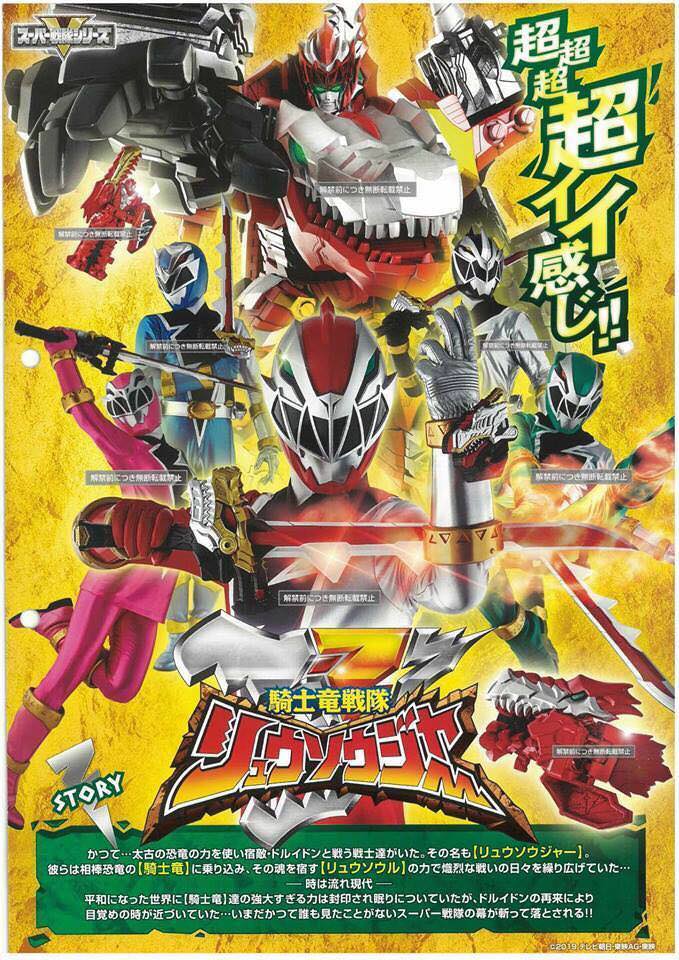 I'm liking the looks of the outfits... however it's reminding me way too much of Kyoryuger... The helmets are cool.
Top

Sorry, I was having Kyouryuuger flashbacks, you're correct
Top

potential, but then again, every show does until the scripts hit the floor.

Dude, Red, look at your sword, it has 'teeth' for lack of a better word on the back end. That is a TERRIBLE way to clean it dramatically.

Hmmm, I am not so much getting a Kyouryuugers vibe so much as a Shinkenger feel so far... I mean either would work for me really.
READING TOO MUCH INTO THINGS![/size] including random over analysis rants on pop culture, and Tokusatsu series reviews, if Toei gets off my back for long enough. Also follow on twitter @R2TMIT, or facebook.com/R2TMIT
Top
Locked
79 posts