Alt Title: Quest to... do something

I enjoyed this more than last week, but it's still pretty messy.

Midway through the episode, let's go do something else. Sort of deflates the direness of saving the kid or those people who are asleep, donchathink? Oh wait, a minute later that thing they were ignoring came back and attacked a bunch of people. Good job, heroes. 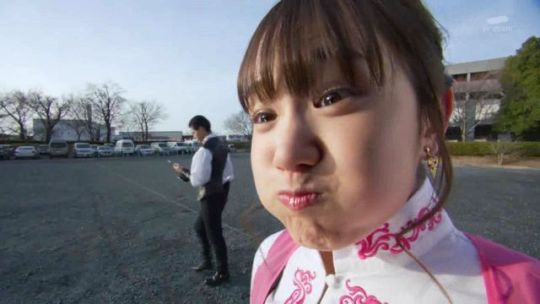 Okay, why is the compass spinning. Is it a magical compass that spins when over temple locations?

What do blue and pink add in this new form, shoulder pads?

Ui and her dad are only in this episode briefly, and he only comes in to get mad at the end that curry is stuck to his map? As a comedy bit this fell flat for me. Also I see that na-nu is his vocal tic. Okay???

Looking back, it's hard to place what didn't work for this episode for me. I think the premise of green and red fighting and growing closer through it is a good one. (The part where they ran into the playground equipment together made me laugh out loud) But dropping the duel and ignoring the monster-of-the-week to go find a Kishiryuu felt very jarring. And why does Towa stop being an asshole, because they agreed to help him get a Kishiryuu? It's fine that he decides to spare the dad, but it really didn't feel like Towa had any character growth moments???

And even the Kishiryuu hunt (as brief as it was) wasn't a waste, since I did enjoy Asuna and Bamba playing off each other. Again, it feels like these are all fine ideas, but they're rushing too much to do too much at once and then it feels a little weird somehow.

I still don't like red (sorry) and blue has no personality, but at least green and black are injecting some fun and personality into the show.
http://takkynoko.tumblr.com/ My new blog

Dad: I want to play with my son but I'm a doctor so I don't have enough time!

Banba: Family is most important.

Dad: Yes but just saying that doesn't give me more time-


I mean, it's pretty obvious that the dad really wants to play with his son but just doesn't have the time. And frankly, if he's a doctor, he's probably got a lot of important shit to do, so just saying "Family is more important than anything else" is really tone-deaf. And again, maybe not a great message for kids? Kinda implies parents should be able to be there all the time and that's just impossible for some people.
Top

Dad's not a doctor just because he's in a hospital. He's clearly a salaryman who's just visiting his sick kid.

BTW, what does the kid have? Like even if the dad is fine, the kid's still sick. How are heroes going to fix that?
http://takkynoko.tumblr.com/ My new blog

i hate this episode so much.

The compass spinning is a sign of magnetic interference, so it doing so is a sign that the area is unusual. Mind you in real life, it probably won't be because there's a hidden temple with a mechanical prehistoric creature inside.

Anyhow the episode was fine. I'd say the victim of the week got barely any focus (the other rangers don't even check up on the man and his kid), but that's better than in episode 2 where they focused way too much on the one-offs.

I think I like the look of the new mech formation, but I doubt they'll ever beat the spectacle of the standard formation's agility and motion.

I can't really think of any magnetic effect that might make a compass spin. Unless maybe you're standing right on top of the source of the magnetic field and the needle is desperately trying to point to it. But magnetism was never my forte so there might be something I'm missing.
Top

I don't know if it's because I went into this episode without any expectations or something like that but in my opinion, this episode was SO much better then the last two episodes. As it stands at the moment, I'm now lieking this season now. Only time will tell if that holds up though xD.

I still don't like trying to force the other characters that birth the minosaurs into every episode. It doesn't work because we don't have time to focus on the team. I'm also not really a fan of how the minosaur inevitably leaves in the first part to come back as a giant so the robot beats it. We hardly see any cool suit action.
Top

Last week, Towa was ready to kill a suicidal young woman. After flirting around for a few minutes with a cute guy who wants to be his friend, he has a complete change of heart.

Fun fact! The show's website claims that Tigerlance isn't a saber tooth at all, but rather a previously undiscovered species of dinosaur known as a Tigersaurus! ...No, seriously. That's what they're going with.
Top

Tigerlance is obviously a smilodon, a type of saber tooth tiger. But I can't think of it being a dinosaur when it is obviously a TIGER. It IS NOT A DINOSAUR but seriously, they claimed it as Tigersaurus? For real?
Top


I think it was in the same temple as Tigerlance. Last episode did show those two Kishiryuu are together.

By the way, wouldn't it be more appropriate to call it Tigerlance instead of Tigelance? Tige does not seem to pronounce as Tiger. I can still see Taiga being useful but not Tige.
Top

So the r in tiger shares the ra in lance (since Japanese don't differentiate between l/r). I'd be fine with Tigerlance personally but luna has final say. Honestly Tigerance, Tigelance, Tigerlance are probably all fair romanizations of that word.
http://takkynoko.tumblr.com/ My new blog