Alt Title: Will the real Zi-O please stand up?

Pretty good episode. It feels nice to have a break from the nostalgia of the weeks to focus on the actual Zi-O story.

It kind of helped to be as lost as Sougo was in the new world. The energy deflated a bit when it's revealed that Another Zi-O is back and just changed the world to where he becomes the demon king. This show can be just so obvious sometimes, y'know.

At least Tsukasa actually did stuff in this episode, besides reveal enigmatic clues to Tsukuyomi. And he even kabe donned Sougo.

I learned a term recently: Idiot plot. I think Sougo forgetting that he has the power to control time too probably qualifies.

At least we have some explanation for the Drive Watch at last.
http://takkynoko.tumblr.com/ My new blog

The Cold Open was predictable. The compromised timeline, however, makes things worse. Nice job screwing it up, Rikiya Koyama.

The last two Another Riders. Hope they come around.

Sorry, Ora. It’s been long established that your boss is beyond you or Heure.

Hiryu took his time growing into an asshat. That said, I like his new suit. Another Zi-O II deserves a Figuarts.

Next episode should be interesting. Heure’s wham face is worth it.

On another note (sorry), If Bandai knew what they're doing, rather than having the Another Zi-O watch become part of the upcoming Another Watch set Vol. 3, said Another Watch & a 2019 logo attachment would've been ideal for the DX Mirai Driver.
According to simpletons on the net, if I want to be a made man, I should become Amazon Sigma. I don't want to be a undead soldier though.
Top

Is the Drive thing going to be addressed? It feels like they've done the tribute episodes and it feels late in the game to have a break in the main plot for one more.

Rejoice! For the fan fic "The Melancholy of Shougo Tokiwa" has concluded with chapter 7: Much Adieu About Nothing: https://www.fanfiction.net/s/13233129/7 ... ugo-Tokiwa

As for the show, are Woz, Sougo, Tsukasa, and whats his name the only ones who remember the other time line? Do the timejackers remember?
Top

this episode gave me a headache.

At 1:48. I think Woz's line should be "That watch was the one Geiz-kun stole from Oma Zi-O". Because Woz's line in this episode isn't clear for me to understand. Because he said "took" but he didn't said from who
Last edited by Ridebeat on Fri Jul 05, 2019 1:14 am, edited 1 time in total.
Top

Hmmm, I think it's obvious enough from the context though?
http://takkynoko.tumblr.com/ My new blog

I know that but still, I think the context needs to be clear in terms of point of view. Woz said "...Geiz-kun took." but from who??? Even in japanese he said "Ano watch wa Geiz-kun ga Oma Zi-O kara..."
Top

Imagine if the characters just stop for a damn minute, ask about each other's objectives with sound logic and decency, then if no conclusion can come from it, then fight after. Probably it will take away half of this series' problems.

But no, Geiz had to be like,
"Oh, so you are Zio? I don't know if the demon lord in this time line is you or this sketchy Another Zio (that has a big statue display), or if you just saved my ass from Another Riders, but if you're looking whitey and can slashy-slashy, then I HAVE TO KILL YOU!"

No wonder Oma Zio killed your tribe, Geiz. He just wanted to clean the world of idiots.
Top

Catastrophe wrote: ↑Thu Jul 04, 2019 7:21 pm Is the Drive thing going to be addressed? It feels like they've done the tribute episodes and it feels late in the game to have a break in the main plot for one more.

The summer movie. Mach and Krim are in it, and they even specifically bring up the Drive Watch in the trailer.
Seen:
Super Sentai: Zyuranger onwards
Kamen Rider: Ichigou-Skyrider, and all the Heisei/Reiwa series except the American shows.
Precure: DokiDoki-Go Pri
Metal Heroes: Gavan 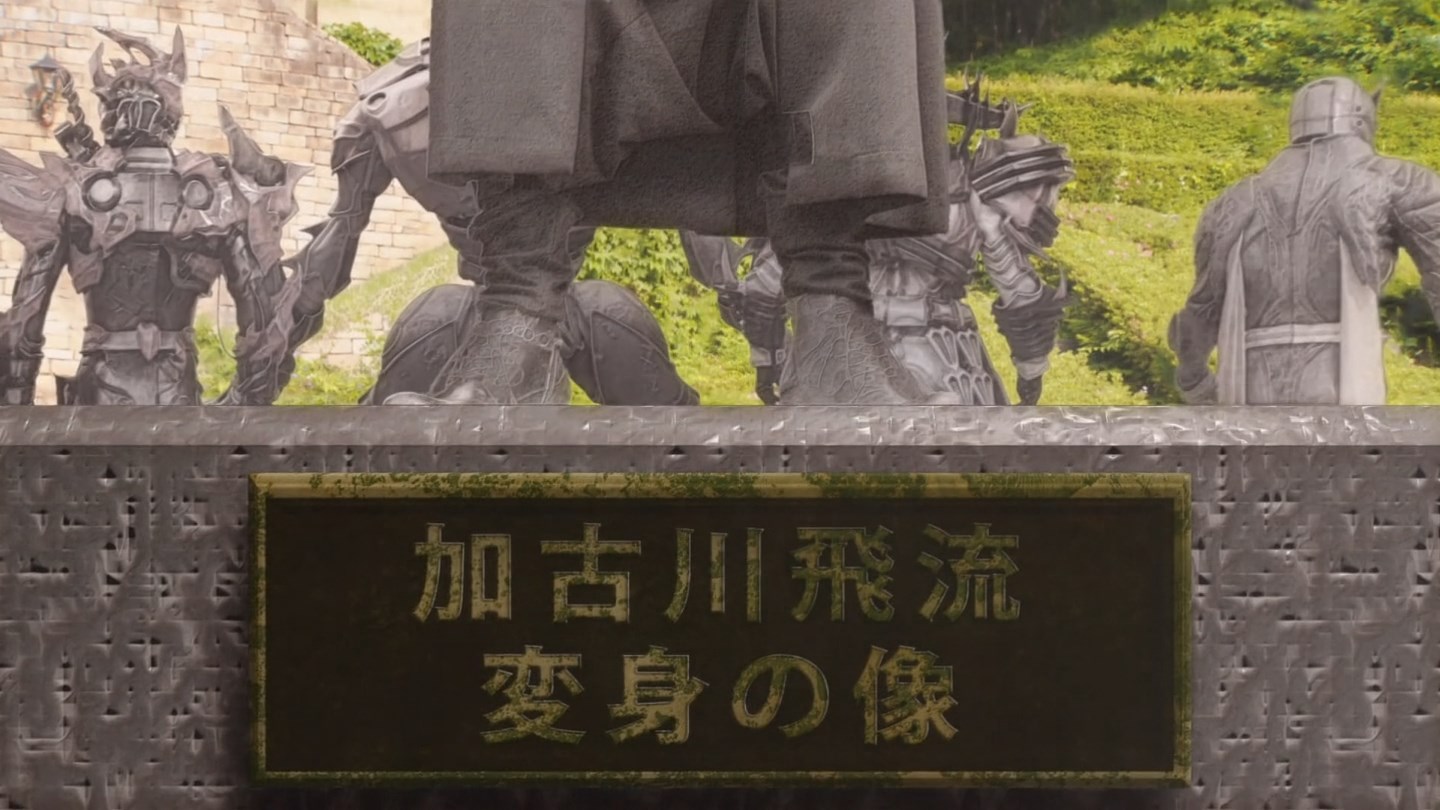 another drive and decade ?
Top

This episode was hard for me to evaluate at first. Just about every concept and scene taken on it's own is something I really like, but every step of the way there is something that hampers it and keeps me from being quite as excited as I could be.

Firstly, Grand Zi-O loses utterly to Oma Zi-O apparently because the Drive powers that Sougo is using are the ones Geiz stole and not one he gained for himself. Fair enough, we were all thinking just that for the last three weeks but the show decided not to actually voice that fact until now for whatever reason. Although I think it's hilarious that they tried to make Drive's goofy car horn sounds into something menacing.

But onto the main premise of the episode itself... I really did like Another Zi-O during the original arc that featured him, and I was glad that he came back as Another Zi-O II but... I don't think I like his stated motivation here. It actually made me a bit upset that they flashbacked to Sougo giving him that final speech from the end of their previous fight, and they twisted it into Hiryuu only feeling humiliated by the act mercy. It's not even that I think that's an unreasonable or unrealistic way for him to react, but I feel like it retroactively takes away from the ethos of that scene. Worse than that is Hiryuu talking about how he wants Sougo to feel his pain of 'not being the chosen one'. Um, that's significantly less interesting than Hiryuu blaming Sougo for the lost of his parents and his future. You could argue he's still generally talking about the same thing, but I feel like the show is focusing on the wrong aspects and making it look like Hiryuu is now just acting out of petty jealousy.

Also his time re-writing powers are both too vague and too extraordinary. That's supposedly how he changed the present, which means I have no idea what kind of extents or limits this power could even have, or how it can translate into a satisfying fight. I wished they just said his power was to rewind time, and that simply the act of becoming Another Zi-O II was what changed the timeline.

But the biggest issue I have with the episode is with Geiz and Tsukiyomi. I want to start by saying I actually almost really loved that scene. Sougo's closest friends having no idea who he is, and Geiz specifically, whom he had so strongly formed a bond with at this point, just mercilessly drawing blood like that? That should be awesome and really drive home just how bad the situation is! But it's hampered by the fact that Geiz and Tsukiyomi got to that point by turning off their ability to question anything.

It'd be one thing, an actual reasonable thing even, if they saw Sougo transform into Zi-O II and thought he was suspicious and on the enemy's side. After all, he's using the name and powers of the evil demon king. But for them to immediately believe that Sougo straight-up is Hiryuu himself despite the following:
1. Zi-O II might be the same general shape as Another Zi-O II, but they're clearly not similar enough to the point of mistaking one for another. (I could believe it if it were just a change of colours, but that's not the case here)
2. That statue of Hiryuu means that everyone should know what the demon king's real human face looks like, which isn't Sougo's.
3. Sougo just beat one of the Another Riders which they did not even take a moment to question until later.
It makes it hard for me to take the drama as seriously as I should be, unfortunately.

Better done is Woz turning on Sougo. Our hero's greatest supporter from the very beginning calling someone else his 'new demon king' really makes it feel like everything has gone wrong. That said, I'm 90% certain Woz is still loyal to Sougo and will betray Hiryuu at the most dramatic moment, which I'm looking forward to.

So yeah, this episode had a lot going for it, and I liked pretty much every element on paper. It's just that every element was a little short of being well-executed. Kind of describes my feelings on Zi-O as a whole even.

another drive and decade ?

Ah, interesting. Love the detail of doing that to hide the fact they haven't showed up yet.
http://takkynoko.tumblr.com/ My new blog

This episode has not win me over.

That opening where Grand Zi-O, rather buddhist temple rolex king vs gold rolex king perhaps predictable, though I do like that they both summon Build and Kuuga respectively like a pokemon battle. I personally think that this should have been the arc when Grand Zi-O should have debut. Fighting against a stronger version of an evil monstrous version of yourself and concurring that with your strongest power which is basically summoning your 19 predecessors at a press of their statue.

and the last guy I wanted to see was Hiryu and he has not changed. His single minded obsession with ruining Sougo's life because nobody was there for him feels so one dimensional I didn't care for him when he debut and the fact that now he's just being an ass to simply spite Sougo for not being a proper Zi-O, I guess, just makes it harder for me to like him. His abilities to rewrite time is a little interesting and yeah I got nothing else.

Geiz & Tsukuyomi, I know that you both see sougo as the devil again but wouldn't it at least kill you to note that he's not the Zi-O you're looking for or at least make note that he looks different to Another Zi-O 2? Still for all the negatives, Tsukassa being here and doing more is good enough for me
Currently Watching
Super Sentai: Kiramager
Kamen Rider: Saber
Ultraman: Z

takenoko wrote: ↑Sat Jun 29, 2019 6:12 pm At least Tsukasa actually did stuff in this episode, besides reveal enigmatic clues to Tsukuyomi. And he even kabe donned Sougo.