The pen is mightier than the sword!
Post Reply
75 posts

Last Zero-One rating: 4.28/5 stars (32 votes). Guess the ending wasn't that divisive, most people seemed to have given it a rather positive rating.

Fan Sub-title: The camp is real

Gonna be honest, don't think this one's for me. The basic premise sounds good on paper. But I really don't care for the over-the-top campiness of it. It feels like there's no real drama/stakes and that leads me to not care about anything that's happening on screen as a consequence.

The narrator feels unnecessary. The woman is shrieky and naggy. The main guy isn't charming at all and doesn't really do anything to earn being a Rider, he just has the magic book in his hands and is the chosen one. Can't speak on Blades since he only really just shows up at the end on a bad CGI lion and smiles

I was surprised that there's an ending song and dance, that's pretty cool, and a nice influence from Sentai

Did I like anything in this episode? Just the stuff that I liked in theory from the trailers, I like books and I like swords. The stuff with the main guy's little sister seems kind of interesting, but I'm full expecting a second or third act reveal to be that the masked villain is that girl

Am I looking forward to anything? I think the main guy and girl might be fine as characters if they knock it off with the cartoon antics, but I'm not really expecting that to happen

2 / 5 stars, nothing to really bite into
http://takkynoko.tumblr.com/ My new blog

How did they manage to find a kid actor that actually looks like Touma's actor? Wow lmao

There it is... the homo sapiens line. Are you not a modern human, my dude???

Okay the CG wasn't as bad as I was expecting judging by everyone's reaction?! I kinda liked it. Saber's model is a little janky (too skinny, joints are folding in on themselves) but the cinematography and lighting were dynamic.


Re: the shrieking and campiness. I'm almost sure that will be toned down as we go on. Every year I cringe at the first 5-10 episodes because the characters (and staff) are still finding their footing on tone and emphasis. I distinctly recall how awful Ex-Aid was at the start, and Gaim too! (Remember how happy-go-lucky Kouta was?) Everything is turned up to 12 for the premiere and establishment.
Touma simply being chosen and not earning anything also doesn't bother me. It's pretty common with Rider, where they stumble upon or already have a power inherent. The hope there is that they learn to deal with it, and grow into it, but that doesn't always happen (Zero-One...).
I do wish they didn't immediately know to slap it on their stomach for a belt, though. Maybe Touma could've used the sword untransformed for a bit before some spark of inspiration hits (another flashback)??

I'm pretty pleased. It was a standard first episode, no stand out moments that made me dislike it. Withholding firm judgement until later on, but right now I'm looking forward to seeing more.

I guess with the woman thing, I'm kind of tired of Toei just always failing when writing female characters. Yeah, it's a boy's TV show, but I'm sure some gals watch it too. It'd be nice if the female character wasn't just a naggy older sister type (wasn't that how Akari was in Ghost?)

Zero-One was super flawed on this front too, but Is poking fun at Aruto and sometimes undermining him made for cute character moments between the two. Yaiba's terrible arc nonwithstanding, it was kind of cool to see a no-nonsense competent and smart female character to go alongside Fuwa's hotheadedness.
http://takkynoko.tumblr.com/ My new blog

Hmm, yeah I feel ya on the naggy sister type. Akari started out that way, but she became more mellow scientist-y by the end (and actually contributed to solving problems and helping the Ganma, iirc). Zero-One's Yaiba was even more terrible than usual for Rider girls, but that's a topic for another time.

Second watch-through I was able to keep an eye on their expressions better this time. Touma's actor has some nice micro-expressions and a good look in his eyes, so he seems very promising. Blades' actor is... I can't tell if that stiffness is the character, or him! Guess we'll find out. Mei just needs to stop bouncing and shrieking and she'll be just fine.

The suit-acting when the MotW's two rocket hands held onto the sword and were pushing Saber back was great. It truly looked like there was weight when Saber used their momentum to swing around.

Who was Ryouta-kun's mother? She looked familiar.

Yeah, going through it a second time, I do appreciate the characters a bit more. What's his face keeps his promises and is good with kids. Not-Akari meanwhile is probably fine when she isn't acting like the guy's big sister.

The monster of the week is a wall master?!

I'm glad you asked about the parents, because there were these two characters listed in the credits and I couldn't figure out who they were. The father and mother are named Kou and Misa and they're played by Enokizono Ikuya and Konna Anna. I don't recognize any of her roles
https://asianwiki.com/Anna_Konno
http://takkynoko.tumblr.com/ My new blog 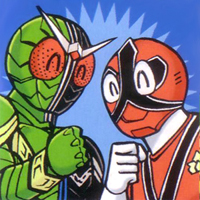 Posts: 268
Joined: Sun Aug 25, 2013 1:31 pm
Favorite series: Fourze
Alignment: Neutral Good
Quote: "But they didn't know that this Majide is MADE OF DEKIRU and I will tsubusu you! I will tsubusu and TAOSU you!!"
Location: CA
Contact:
Contact daburuwosagase
Website

Come to think of it, Gansekiou Golem is probably based on Gankutsuou/Count of Monte Cristo. I'm woefully unfamiliar with the storyline, but I wonder if that's the inspiration for the MOTW's particularly grotesque head design.
Top

I like books and I love reading. So this show is 100% for me. This first episode also proves that Fukuda was not a bad writer. Ghost was just really bad in a lot of aspects and what it had become was not entirely his fault.

My only concern here is that they seem to be blowing their CGI budget already in this first couple of episodes that it worries me what the succeeding episodes would look like when production quality dwindled. Hopefully they will distribute the heavy CGI in the whole installment instead of just the initial episodes like what was done in Build.

Build did really well distributing their heavy CGI and I like that factor about that KR Installment.

Is the SD torrent supposed to have the HD CM file?
Top

Yeah, going to try to avoid encoding too many redundant files. If it's under 100 mb then I think it's fine to encode only one version
http://takkynoko.tumblr.com/ My new blog

I didn't like it. Any good show needs to have enough exposition so you get whats going on in the first episode.

There was some strange dialogue as well. Like the editor walking in and despite it being established they are supposed to be friends she has to say who he is and is his editor.

I couldn't help but be distracted by Lion mans stupid expressions every time he had a close up this episode.

I'll wait for a few more episodes before making a more blanket shit/not shit call, but at the moment it hasn't captivated me at all.
Top

If Mei is like any previous character, it's clearly Akiko.

I thought this premier was just alright. It's very, very standard first episode stuff. Unassuming hero and his pal come across fantastical monster, he comes upon a mysterious power and uses it to save the day. It's a formula that's tried and true, and while I don't think there's anything remarkable in this premier, it did the formula well enough. I did think it little strange how there's a Rider/cool suit on the villain's side but absolutely no fanfare is given to his appearance onscreen. No dramatic angles or walking out ominously from behind smoke or shadows or anything like that. It's a very casual villain gathering.

Those first few scenes introducing Touma and Mei were super clunky though. There's no way to make stating their name, relation and occupation for the audience all within the same short conversation sound natural. Even the emphasis on Touma's thing about protecting promises felt way less subtle than Aruto's thing about smiles, and these shows are pretty unsubtle to begin with! It is an endearing, weirdly-specific trait though, and ripe for good hero moments in the future.

The Saber suit is eeeeeh. I no longer think it's too busy like I when I first saw images of it online, but just off the bat it's not particularly cool or striking to me. I used to think the same for Drive and Build though, and now I like those designs a lot, so here's hoping to get attached to Saber's look over the year.
Last edited by BreadToku on Sun Sep 13, 2020 9:25 am, edited 3 times in total.

Yeah, going to try to avoid encoding too many redundant files. If it's under 100 mb then I think it's fine to encode only one version

Fair enough, thanks for clarifying.
Top

this is going to be my first KR. but i liked the idea of how its ties books into changing the world from books containing worlds, namely stories. im guessing his upgrades will be Brave dragon volume 2, 3, etc or perhaps new moves? but the swordsmen who protected the book that created the world sounds awesome. really enjoyed everything about this episode, but im getting kyuranger fears where the first few episodes were high budget, then it watered down.
I work too much ....
https://www.facebook.com/ThisGeekLife
https://twitter.com/Samuraibirru
Check out my gaming vids!
Top
Post Reply
75 posts