Thought this was a pretty enjoyable episode, despite half the episode being a commercial for the toy for Kirameijin

The concept of a monster that makes monsters bigger or smaller using a touch interface like from smart phones is cute and a sign of the times. Who knows if touch interface will retain this in th efuture

The story about the kid and his mom is cute, but feels kind of ranger light this week? All our beloved rangers are busy working leaving us with the just red and silver. Is there a sentai trope name for this sort of thing? Red and silvers stop hogging all the spotlight, I like the other colors better!
http://takkynoko.tumblr.com/ My new blog

You say that as if the entire franchise isn't already a toy commercial first and foremost! Also wow, started downloading this as soon as I happened finished watching the previous episode.

This is an absurdly cute episode. My cheeks are stuffed with sugar from watching it. The kid playing with the mechs is strangely engrossing, Jyuruu talking to the kid under the role of a toy come to life is really cute, and the resolution and message of the episode was really sweet even though it could have gotten away with all being a big joke.

You know, when I was a kid, I played with my toys and I created scenarios and stuff like that. I found it really endearing too, because childlike imagination is truly precious. I don't think I ever built anything as elaborate as that kid, but I thought it was pretty cool!
http://takkynoko.tumblr.com/ My new blog

Only thing I want to know is how did Jewel and Kirameijin get back to the base that fast?
KR
Seen: Kuuga, Agito, 555-Ex-Aid; Amazons
Now: Saber
Faves: 555, Blade, Drive

I wonder if it was a budget conserving episode. Definitely one of the weaker episodes, but it was still pretty enjoyable. Says alot about the overall quality of the show.
Top

I thought of an Oyaji Gyagu: What does Kirame Stone Fire say when he arrives to a battle? Answer: ORE sanjou!

Ep lools like it started lazy, but ended nice. 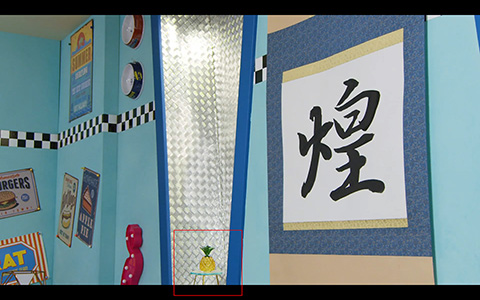 There's a crystal apple in the opposite alcove
Top

Have I mentioned how nice it is to have a face villain for the back-half of this series? Yodonna doesn't have much of a backstory, but damn does she have presence. Her actress is in that perfect ham/snark zone here.

Anyhow, I reckon that this is an episode that was designed to require minimal filming with the cast. I seem to recall seeing that the usual Sentai movie was still going to happen, and that it just got pushed back. So I suspect this may have been how Toei worked that production into the cast's schedule? Or maybe everyone was just due for a break, and this is how they did it? Either way, only a single scene with the cast takes place away from the base or a mecha cockpit (both of which are on-set) so it would have been a real quick job for the cast.

The resulting Kiramager-light Kiramager episode felt almost more like one of the Mashin Talk specials at times, so it's a bit of a wash in terms of entertainment. I will give Toei credit for this episode, as it's a reasonably creative premise. We've had shrunken rangers before, but I cannot recall there ever being an episode where the mecha was shrunk down like this as well - or for that matter being able to build an episode around the actual toys. On the other hand, half the episode is watching a kid play with the show's toys. This is endearing in some respects, but not especially entertaining within the context of a flashy action show. And on which note, this is totally something you can only get away with in Japan; making the show an actual 30 minute toy commercial would never fly in the US.

Meanwhile from an outsider point of view, I'm still trying to figure out how exactly they pulled off the moving toy robos. Judging from the fringing around Gigant Driller, it looks like they largely just filmed the robo suits in front of a green screen. However the robos don't entirely look like the suits; they look appropriately un-detailed, with a plastic finish to them. I have to assume Toei applied some kind of filter or post-production CGI touch-ups to the footage, rather than doing something CGI from the ground-up. Either way it's surprisingly convincing for as cheap as Sentai is; the illusion really only breaks down when the kid is interacting with the moving robos, since they're clearly composited in and he's interacting with a void.

And thank goodness, we're finally done with the Music Festival!

"What an unbelievable kid!"
The kid's name? Hatte Saburo

oh i assumed the robo were puppets at times and other suit actors on green screen.

when was the last time we saw the toys as a prop? i mean, unless im wrong and i likely am, arent what we see normal "made for production models" and not the toys youd get from the store?
I work too much ....
https://www.facebook.com/ThisGeekLife
https://twitter.com/Samuraibirru
Check out my gaming vids!
Top

LOl the wiki is right at the top of the forums: https://wiki.tvnihon.com/wiki/Mashin_Se ... ice_Actors