Alt Title: Luna stole my post and didn't add the poll or links!

Lulz at Mabushiina holding a pen/pineapple and apple/pen. They are never gonna get sick of that joke, are they?

In contrast with last week's episode, this week's was peak Sentai. Goofy MOTW, crazy antics, people acting like cats, it's all great. Probably my favorite episode so far this series.

A bit late in the series, but some nice character development for Kurantula as well. There's something to be said for having a small cast of villains, it gives us enough time with all of them to really get into their heads. (Of course I say this when I'm still not sure which one of the three Saber bad guys is Storius)
Top

Remember when Sayo was a doctor? She's just handing out drinks at the base now

Goal 1: Turn the girls into cat girls
Goal 2: Please admire the work that went into these monster designs

I can't believe I'm sympathizing with Kurantula thanks to one episode

He fell in water, no counto. Oh the mid stinger already tookc are of it

Yeah, that was a great episode. What more can you want from a sentai? 5/5, entertained the whole way through
http://takkynoko.tumblr.com/ My new blog

This episode has the proper mixture of goofiness and seriousness, everything that I love about Kiramager. Loved it.
Wow, I never knew how much thought and emotion he puts into his plans. Makes him way less evil than the rest.
We’ve been seeing them eat more snacks lately. After a long time.
The place looks in bad shape after the Kiramagers appeared.
Man, the faces that Sayo makes are really something…. Lol.
Shiguru CLEARLY likes Sayo rubbing her head against his arm…. LOL….
What exactly did Jyuuru like about Kurantula so much that made him want to follow him? I didn’t quite get that….
Huhh….. So the Mashins also are crushing on their partners who've been turned into cats…. Dang it… the girls becoming cats thing is starting to become very creepy and perverted….
What diverse mindsets the people at CARAT have about cats…..
What THE HECK did Takamichi offer the girls to eat anyways? I feel disgusted….
Man…. How distracted were they that it took them that look to figure out that Jyuuru is missing…??!!
Oh, so Jyuuru likes Kurantula’s clothes… I finally get it….. What’s so special about them exactly?
Why was that poster that Kurantua and Jyuuru found saying “Kira Kira”??
AWWW! Kurantula has grown to love earth…!!!
Seeing Jyuuru and Kurantula paint was quite interesting…
Where did naming the Jamenjuu come in all of a sudden…??!!
Why is Takamichi still carrying that green thing(whatever that’s called) around…??!!
Yodonna kinda felt that she was extremely bothered about Kurantula this episode like she was way too annoyed at how he was doing what makes him happy….. Like how parents do when their children are having fun doing something, even if the thing is perfectly harmless… lol…
Lol, Tametomo called Sena “Sena-chan”. It’s really funny to me when they shift honorifics like that, from casual addressing to “…-chan”… Lol.
Doesn’t anybody ever get tired of all the “nyaa”s in this episode?
I think what Kurantula is pointing towards is creative freedom. I really feel for him…
Man, the way they finished Kurantula off was painful…. and cruel…
I’m surprised that the other Kiramagers had no reaction when they heard about Jyuuru spending time with Kurantula and having fun.

LMAO. Who do you guys think is the best Cat-human out of the three? Jyuuru and Sena make perfect cats, their faces are just right, imo!!! Sayo, well, I’m not so sure about her though….

Some cute behind the scene photos: 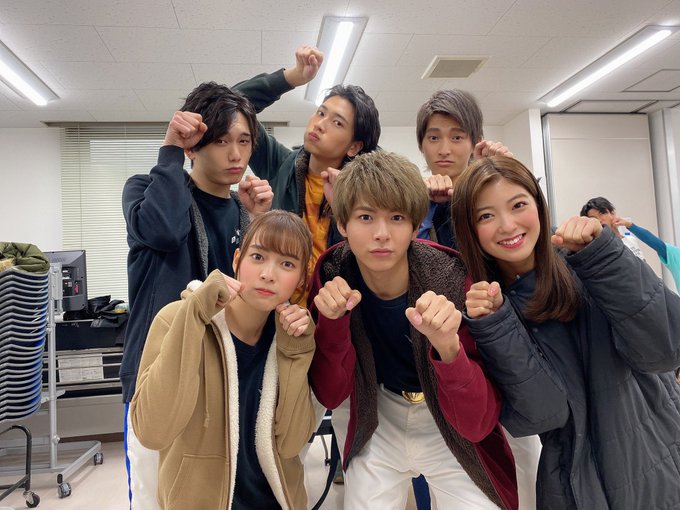 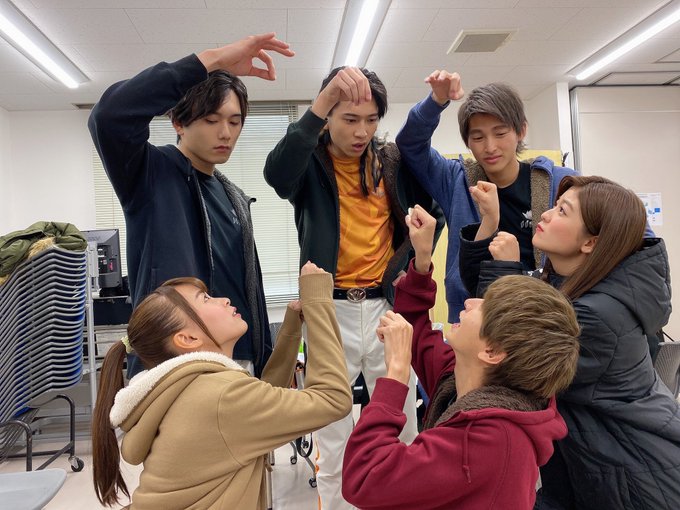 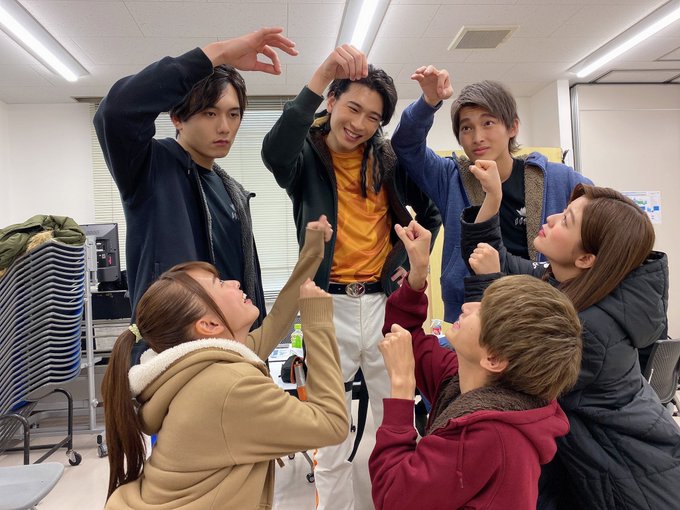 Where the heck was this kind of writing for the villains 30 episodes ago!? One of the dragging problems for Kirameiger has been the small pool of one-track villains; up until Yodonna showed up, the show succeeded despite the villains, not because of them. But right as we reach the endgame for the series, we finally get a damn good villain episode. It makes me think of how the series could have been even better if the writers had given the villains some depth early on.

Anyhow, Kurantula gets a focus episode, and it is glorious. Dare I say it's better than even some of the good guys' focus episodes (sorry, Sayo!). The writers did a fantastic job taking Kurantula's basic character traits - being the monster maker and enjoying games - and building a complete episode on top of it. Believable character motivations, a meaningful personal conflict, repercussions for actions taken. It's not quite enough to redeem the relative lack of development in the last 40 episodes, but it does a lot to elevate the character in the end.

Though the fact that all of this is paired up with a cat episode makes for a bit of an odd juxtaposition. It works perfectly fine, but I do wonder if perhaps it softens Kurantula's plot a bit too much.

In any case, the cat antics are classic cornball Sentai. It's executed well, and I feel a lot of that has to do with the cast. I don't think most of the other casts (e.g. Ryusoulger) could have done an episode like this and pulled it off. It's a very fine line between cheesy-and-good and cheesy-and-bad, and Kirameiger definitely has a knack for making comedy plots work.

Along those lines, the action here was a pleasant surprise. You wouldn't expect an episode like this to have so any untransformed fighting, let alone as much as we got. It was a very physical episode for all three of the cat-rangers, making for an above-average episode action-wise.

Finally, I don't know whether to credit or curse the translation team. That was a lot of bad cat puns.

Lunagel wrote: ↑Mon Feb 01, 2021 6:30 am A bit late in the series, but some nice character development for Kurantula as well. There's something to be said for having a small cast of villains, it gives us enough time with all of them to really get into their heads. (Of course I say this when I'm still not sure which one of the three Saber bad guys is Storius)

A small cast of villains can work well, but I'd argue that the bulk of this series has not made proper use of the villains. Kurantula has largely been the stereotypical monster maker throughout this series. He has some character traits (which this episode greatly expanded upon), but he's done very little of interest on the whole. It makes this specific episode very refreshing, but it can't make up for how little these guys did the first half the series.

Sayo in a nutshell. I really am left to wonder if the writers know what don't know quite what to do with Sayo. She's had the weakest focus episodes and the weakest day job portrayal overall. What makes her shine is not very visible most of the time.


Goal 1: Turn the girls into cat girls
Goal 2: Please admire the work that went into these monster designs

I'm convinced that the moment they decided on a cat monster, the writers immediately started planning for a cat fight between the girls. And credit to them, they played the part well.
Top

To be more precise, Kurantula's thing is he's obsessed with Earth culture. That's why all the masks he makes are based on Earth objects. Also I believe luna's request is that he only be referred to as Count Crunchula as the correct spelling
http://takkynoko.tumblr.com/ My new blog

takenoko wrote: ↑Tue Feb 09, 2021 3:43 am Also I believe luna's request is that he only be referred to as Count Crunchula as the correct spelling

Good god that's both hilarious and super faking weird. Overall a perfect episode which made me share parts of it with my best friend who just so happens to have a cat. When I told him about the giant lizard with the can of cat food for a head he was like, "wait, wtf!?!?!" I also burst out laughing at the title for the next episode as all I could think of was the song of the same name and I swear to god if it plays at any point during it, I'm gonna lose it xD

The translation team should say "Yurushite Nyan" for being too good at puns.

I wonder which fifth of Kurantula was destroyed? The blind loyalty part?

Has there ever been a Super Sentai were the endgame was that the generals realize that being evil is a dead end street and defeat big evil by themselves and then apologize to the Sentai for causing problems?

I would not have minded if Yodonna got temporarily turned into a neko and this made her even more mad that usual.
Top

Power rangers could learn something very good from this episode, this is how you do comedy with out it being stupid or childish or just pathetic
Top

As an easter egg, I found Decade's camera: 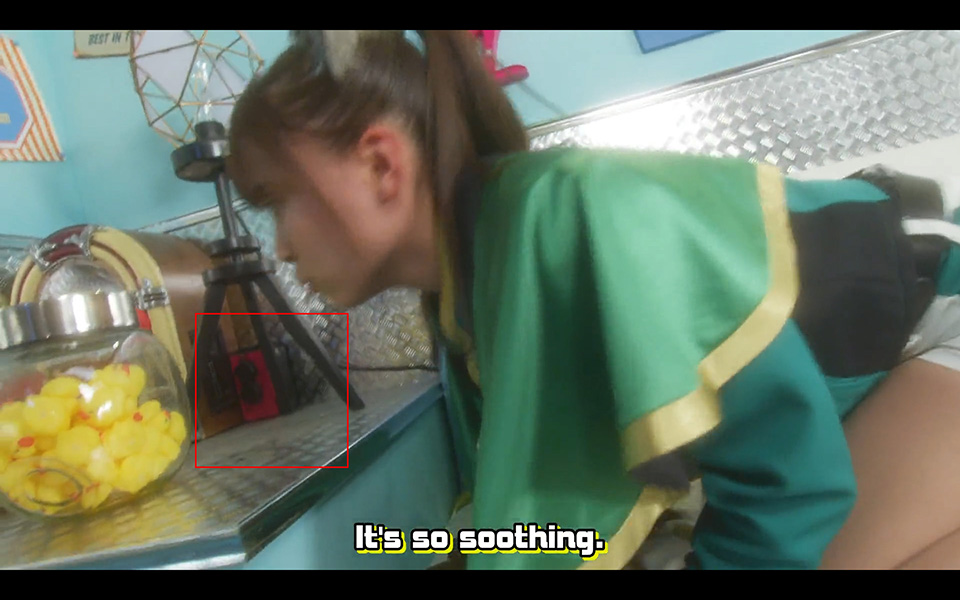 It's still amazing how this Show can be so massivly silly, without becoming outright ridiculous

But that's the Sparkly feel good Sentai for you. And the Cast doing a good Job, at having fun with it and not making the most stuff even look remotly weird.

Kinda glad they didn't kill of Karantula in 36 now, and it was really just a Setup to why Yodonna split Sena by accident, not sure how a Whip has multiple Settings you can mess up thou, is it Sonic-Tech?

Anyways, whatever part was killed, appears to be one that was holding him back from realising what he truly wanted/liked about his Profession, really kinda sad that they didn't put more of that troughout the Series, but then we probably would have as much feel good Episode as we've got.
So at least his final Episode was good characterisation, and what better subject for having something enjoyable, cute and destructive as Cats?

While all 3 did a nice Job at being Cats (Sena as a Cat in a Box, I mean what more do you even want?!?), it felt slightly off that Jewel was the only one acting on his Human impulses and beginning to draw, if a cat would get coloured Paws it would be everywhere but on the Canvas

But it made for a nice realisation Scene on Kurantula's part so I let that slide.
Top