Since we don't release this series anymore, I'm just going to put the thread up as soon as it airs

Mei's boss is back. Is she like the only guest in this series?

What? WHy does Touma have super eyes now?

I love how creativity bankrupt Toei is nowdays. "What should we call the bad guy's new Kamen Rider form? Oh I know, Kamen Rider Storious. Nailed it." It's always cool when your rider name is just your actual name

KR Storius sucks, but his lackeys are pretty cool? Love that they have different weapons and the design is great for a grunt

Whoops, the city got nuked

Nice, we have the siblings training

Dislike Daishinji picking up the sword by the blade part

I still don't know how to feel about Ren. He seems like a different character now

What? Sora's mom is still alive?

Okay, guess we have time for one last Touma/Kento bit at the end...

Wait, why is adult Luna not played by Sophia. I thought Sophia was Luna's clone...

Soooo why age Luna up now? They could have just had an adult actress for when they first found her again. Maybe they thought kids wouldn't recognize her if she weren't the same age and didn't think it was weird till it was two grown men obsessing over a little girl?

Oh, Luna also has the eyes

Feels like a last episode. We have all the guests from previously showing up. Everyone's gearing up for a final fight. Someone on tumblr posted a spoiler from the preview as soon as the episode finished airing, so that was cool. Touma's no longer a pedophile. They talk a lot about deciding the ending, but will Saber actually have a good one?
http://takkynoko.tumblr.com/ My new blog

I like how they misspelled Storius's name in-show. "Are you going to change his name now?" asks stardrago

Sooooooo, do we have any actual motivation for Storius trying to destroy the world? I kinda wasn't paying attention the last couple episodes, but somehow I doubt it.

Is Sophia being a clone going to have any more bearing on the story? Are we not even questioning it at this point?
Top

I had the same thought. "Oh, I forgot we left off with him gaining the power of omnipotence... but he's just going to use it to destroy the world anyway."

I mean, it was worth Sophia getting double cloned at the end of 43, but now I guess this new girl is Luna. Okay I guess???
http://takkynoko.tumblr.com/ My new blog

Posts: 1111
Joined: Wed Dec 03, 2008 11:55 pm
Favorite series: Go-Busters and Gaim
2nd Favorite Series: Gekiranger and Ryuki
Dreamy: Hinata Hyuga
Favorite Actor?: Mizuki Nana
Alignment: Chaotic Good
My boom: Touhou Project
Quote: "Before you criticize someone, you should walk a mile in their shoes. That way, when you criticize them, you're a mile away from them and you have their shoes." -Jack Handy
Type: INFP Healer
Location: Aperture Science Enrichment Center.

This episode is hard for me to fully evaluate right after watching it. gonna need to sit on it a bit and let some thoughts simmer.

immediate impression, though, is that several parts of it, if not the whole episode, feel stronger than 90% of what we've had in this show so far, and it KINDA feels like a good episode... but that feeling is muddied by the thoughts that a) an episode of this show being good, especially at this point, feels unearned after how it's been for most of its run, and b) if the writers are capable of making the show feel this much better to me, why couldn't at least a larger portion of the previous episodes been this good? I'm not foolish enough to ever expect a show to be top quality the whole way through (though I can hope), but at least if we'd had more episodes of this tier, with better writing for the villains especially, this could've been one of the better seasons.
Top

This episode felt really solid for me.

We have a good portion of character moments, and also a really cool fight scenes with the Sages. But the Sages felt shoehorned in out of nowhere. We didn't hear about them before this but now they're the pioneer of the guild styles? Is there even a guild styles to begin with? I thought they're all just Swordsmen of Logos? Were there guilds?

The character moments tho felt well-paced and well-written this episode. Kinda makes me wonder, were the writers always this capable of good character writing? Why are we only getting this towards the end?

Adult Luna is pretty, I like her. But abit weird that it's played by a different actress.... I thought Sophia is Luna's clone...?

Touma apologising to Luna was very heartfelt. I could watch an entire episode of just Touma, Kento & Luna talking and catching up.

Ren felt like he matured. I want to see him pull off some of Desast's moves - to honor him or something. Would be cool.

Do the siblings even matter anymore apart from being extra muscles?

Will we get a Rintaro confessing his love for Mei in the finale? Awww.

What is this obsession that Storius have with destroying the world? What's the basis for it? We'll probably never know.

Overall probably one of my favourite episode this season. It's a shame that Saber only got this good towards the end. If the writers are capable of good writing, what's holding them back previously? That being sad, not every Rider series that started strong finishes strong (looking at you, Zero One!) so I look forward to a strong ending for Saber.
Complete. Start Up. 3. 2. 1. Time Out. Reformation.
Top

darkmage02 wrote: ↑Sun Aug 01, 2021 12:31 pm
We have a good portion of character moments, and also a really cool fight scenes with the Sages. But the Sages felt shoehorned in out of nowhere. We didn't hear about them before this but now they're the pioneer of the guild styles? Is there even a guild styles to begin with? I thought they're all just Swordsmen of Logos? Were there guilds?


There was a blink-and-you-miss-it introduction of the sages like 20 episodes ago (seriously, it was like, maybe 30 seconds), and another one where Master Logos mentioned killing them. I only remember because it pissed me off so bad.
Top

I notice one thing at the ending scene , Touma is holding Kaenken Rekka rather than Haouken Xross Saber?

Looking forward for next episode for Calibur's fight
Top

Kento was there from the beginning? I only noticed him when the first fight began and Espada was shown

Wow, they managed to bring back all the guests. Good to see

So... Ren has finally matured?


From the beginning of what? I don't think he's introduced till episode 3 at least. Maybe end of episode 2
http://takkynoko.tumblr.com/ My new blog


From the beginning of what? I don't think he's introduced till episode 3 at least. Maybe end of episode 2

Was reading the wiki and learned the sages have names. Lord of Wise Spartan and Highlander are self explanatory. DeAgo is obviously a reference to the publisher DeAGOSTINI. But what's Kuon?
http://takkynoko.tumblr.com/ My new blog

Sooooooo, do we have any actual motivation for Storius trying to destroy the world? I kinda wasn't paying attention the last couple episodes, but somehow I doubt it.

Is Sophia being a clone going to have any more bearing on the story? Are we not even questioning it at this point?

Storius does have a motivation for ending the world ... um ... something about how humanity has ruined it, and were all garbage. and i think something about feeling jipped out of being able to make the world in the first place? he was 1 of viktor's crew who sought the ultimate knowledge/power, and when he wanted to use it for ... whatever ... viktor stopped him? or something? and the book go wrecked and thats how we got wonder rider books, but now storius has remade the ultimate book /power, which doesnt make sense as it seemed like each wonder ride book was a part of the original book but who care about minor details?

i dunno, seems like KR durandel's power of move around would be VERY useful to dodge things and touma never uses it.

so, Ren has both his sword and the phoenix sword? ok. cool.
is yuri using both light and dark blades now, or will Kento use dark blade?

as far as luna growing up, it was a nice touch, but, feels empty too. but ... everyone is a kamen rider now! remember when they were fighting the megido? and it was all so simple? now, its riders vs riders with a thin veneer of plot.
I work too much ....
https://www.facebook.com/ThisGeekLife
https://twitter.com/Samuraibirru
Check out my gaming vids!
Top

Best guess, it's a reference to the kids supplemental study school Kumon. I know they're a show sponsor and occasionally you see their commercials. 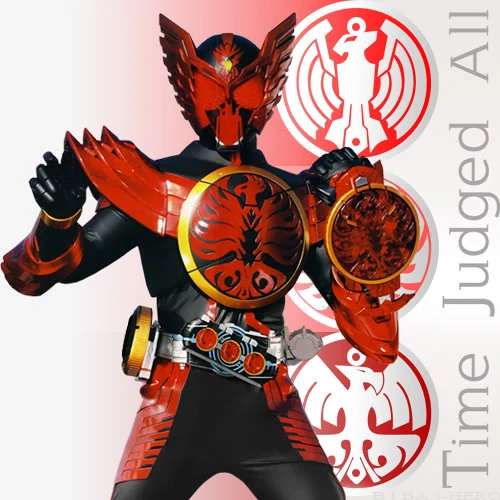 I think this is one of the best episodes, although as everyone has already pointed out, it has its problems.

The sages feels like a cheap way to extent even more the plot. They are all powerful and know all the techniques, but it was never established as that. As far as I can remember, they're just counselors or something like that. If they're so strong how come they're dead. It's also interesting that there are only four tombs so it gives the appearance that they're the only ones that held that position through the entire history of SOL, however not even Master Logos is immortal, couldn't Storius revive like tens of generations of Sages and have an army of those?

So until this point, no one knew that something was happening, only those connected to Wonderworld? So, if I lived in a neighborhood trapped inside Storius' spell, would I know? Could I get out? Could people outside walk inside the circle since they don't know? Would they get trapped? I get they wanted a scen of a crowd running, but get a better excuse.

I think Luna being interpreted by a different actress can be explained in a different way, the new actress is 22 while Sophia's is 40 years old, so it could be a matter of she is taking the form of a woman similar to Touma's age.

On a positive part, I loved the exchange between Rintarou and Mei. Buster and his wife were cute too. The others were okay.
Top
Post Reply
15 posts • Page 1 of 1