Do American kids dislike carrots? It always seemed weird to me the random things Japanese kids dislike. Seems like a cultural thing

Oh the pirates are back

Wish I had an HD pic of the worlds map. It's kind of neat to see the different worlds that have been freed while inspecting the ones that are locked. Unfortunately, the locked worlds are almost impossible to read with the lock image on the words

Posts: 1147
Joined: Wed Dec 03, 2008 11:55 pm
Favorite series: Go-Busters and Gaim
2nd Favorite Series: Gekiranger and Ryuki
Dreamy: Hinata Hyuga
Favorite Actor?: Mizuki Nana
Alignment: Chaotic Good
My boom: Touhou Project
Quote: "Before you criticize someone, you should walk a mile in their shoes. That way, when you criticize them, you're a mile away from them and you have their shoes." -Jack Handy
Type: INFP Healer
Location: Aperture Science Enrichment Center.

is it Gege that's possessing them, or is the "god" they're talking to just possessing Gege sometimes to trick Bukkowausu so he can free the worlds? I've only been watching the raws for this since we stopped subbing it, to try and test my Japanese, and I got the impression that any time Gege talks all sweet, he's been possessed this whole time, and this "god" might not be 100% a good guy, since he split up that couple, like he's trying to segregate all the worlds, and the REAL final battle might be to allow the worlds to intermingle, since the team can't exist as-is otherwise?
Top

I'm almost certain that Gege is being the worse impostor god ever
http://takkynoko.tumblr.com/ My new blog

I think Gege and Stacey were possessed by ..... Hatte Saburo. 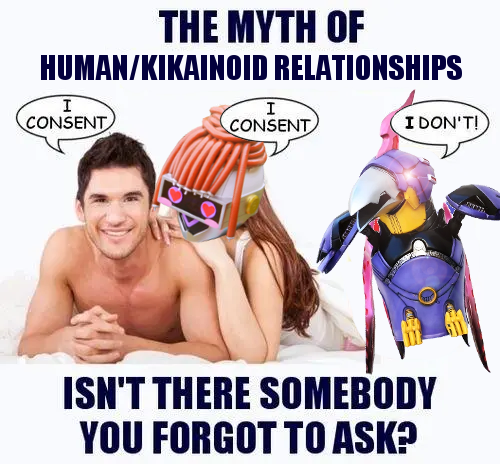 I guess???
http://takkynoko.tumblr.com/ My new blog

Good episode. Where was all this story all this time? They should've been more consistent about the plot than pulling out one random clue/hints every 5-7 episodes (or maybe it was more infrequently).
Also, the Zenkaiger team was really efficient this episode- obviously because they had to deal with 3 monsters in the same episode. But the other times, they were just a mess.

Wow, the deity came to ask the Zenkaigers for help instead of solving the problem on his own....? Can't he like do everything and anything? Then why ask for help? Doesn't want to get his hands dirty or something?

So the thing with Gege in the previous episode was him being possessed by this deity character.

Sapphire world... A subtle Kiramager reference... And there's where the Mashin props come in handy....And there's even that dialogue when big Sapphire world gets destroyed which is similar to a lyric from the Kiramager OP. Not bad. I like it. Although I would've liked it better if they just made a Crystalia world. Or is that not possible since that's a planet in a certain world?
Also, I hope there's a Zenkaiger vs. Kiramager movie announced soon. I've been anticipating it ever since I understood that I can't really like Zenkaiger that much. We didn't even get a Zenkaiger summer movie(Super Hero Senki doesn't count as one, right?).

And now the characters in Zenkaigers are atheists all of a sudden, who presumed God didn't exist....

Wow, does Kaito have a big house....? Already having so many people live there and then adding Stacy. Where will Kaito's parents live when they come back?

So bat world turns people into vampires... Totally not logical.... If they wanted to involve vampires then they should've gotten a vampire world. That makes more sense since it's more believable to have a world full of vampires than a world full of bats. And they can't tell me that in the bat world, the people are all vampires- that's dumb too. Even the big vampire world said when being destroyed that only a few bats suck blood from animals.
From one bat pun to another.... Have I seen that golden bat somewhere? It looks familiar...

Is it wierd that I ship Magine and Vroon a little bit because of how well they get along?

So they're gonna trust that deity just like that. Ok...

Looks like the final arc is gonna be interesting. Looking forward to it.

I always wondered that too. I don't remember kids disliking carrots while growing up either.

Yeah, lol. I never thought I'd see that suit again.

I was weirded out by that too... Why would someone want their body to be possessed by other people?


Wish I had an HD pic of the worlds map. It's kind of neat to see the different worlds that have been freed while inspecting the ones that are locked. Unfortunately, the locked worlds are almost impossible to read with the lock image on the words

I think I'd also do the same for the humans... Lol

So if it's about keeping the human race pure to prevent anymore 'Stacy's from being born, then I'm on that deity's side...
Thenosa

It really feels like a "What does God need with a spacehship?" If God created all the worlds, why does he need the Zenkaigers to defeat Bukkowaus for him?

Quick poll, do you think Gege is God?
http://takkynoko.tumblr.com/ My new blog

I don't think Gege is the deity here. It's a different entity, separate and independent from all the others.
Thenosa

I'd buy Horan Wrap. Horan Chiaki is looking good, since it's been a billion years since Magi

Prepping for the McDonalds Shinkalion Z had me looking up the anime. It seems kind of fun? Definitely the kind of thing I wish we were subbing more of

I hate everything about Oshiri Tantei, but how can I not sub a movie commercial where the bad guy is Shiriarty and they're making fart puns and shooting fart beams at each other?
http://takkynoko.tumblr.com/ My new blog

About thirty seconds of this was good: the Kiramager quote and the swing set scene. Other than that, it was three uninteresting MOTW, three uninteresting giants of the week, and a god story so transparently bogus that most of the little kids are facepalming.
Top

Why didnt Kaito ask "Kami-sama" to return his mom and dad to him from whichever parallel world they were in? thatd be the real test.
i liked that the Zenkaired suit showed up again, even if just as a Carrot joke.
Batworld hanging upsaide down was really good actually, couldnt tell if it was hanging or just special filming.

seemed to me Kami-sama wants the worlds separated again, as he neve wanted his worlds to commingle with each other. nice twist, and really wasnt expecting it from this series as it being pretty straight forward with its villains. and come to think of it ... no generals have been defeated yet. usually 1 would have croaked and been replaced by now, unless thats what Stacy is now? anyways, really eager to see where this goes now.
I work too much ....
https://www.facebook.com/ThisGeekLife
https://twitter.com/Samuraibirru
Check out my gaming vids!
Top

the whole "Kami-sama" angle feels like a giant deus ex machina. I'm disappointed, I feel like it's left field.

Wait, so people do think there is a "god" and it's not just Gege's bullshit?
http://takkynoko.tumblr.com/ My new blog

there is definitely an entity that has been playing its own game in the background. whether it's a god or not, it's the only way to ID it at the moment.
Top

'God' or not, I don't think it's Gege who's pulling the strings here. Because that thing which happened to Gege a few episodes back, when he felt consused when accused of treachery, he felt like a completely different character then when he's manipulating Bokkuwaus. So I think he was also being possessed by this entity who calls himself 'god'.
Thenosa