All that exists in my heart is cholesterol...
Post Reply
4 posts • Page 1 of 1

Placeholder till I get a chance to watch it
http://takkynoko.tumblr.com/ My new blog

Skipping both the previous episode recap and opening sequence cause ain't nobody got time for that.

This episode feels like something out of a mecha anime. The chest spike on Destream reminds me of some variable fighters from Macross. The sad music with vocals during an intense fight is typical of the genre.

Why in the world did Sakura suddenly changer her hairstyle? Is she trying to channel Relena Darlian from Gundam Wing?

Poor George. Why was Daddy Kirizaki holding a rock?
Top 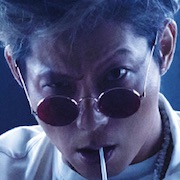 In a vacuum I'd call this the best Revive episode we've gotten.

Happened way too late, Genta should have dealt with Vail much earlier but for what it is this was a pretty awesome confrontation. I just really wish Akaishi wasn't part of the episode - it was unnecessary as heck

But as someone who has grown to extremely dislike this season, I can say that this really was of great quality and it does make me appreciate how much so many others I've seen enjoy the show as a whole.

Genta has probably overtaken Hiromi as my favourite rider of the show now because of his whole story.
watch ultraman ginga it's actually a really fantastic show
Top

This beginning fight is pretty good

lol a manga that says Scientist

LOL why is this scene in sepia tone. It's in present day. Did they forget to remove it?

Destream has a cocoon? Nice, form doesn't look too bad either

Ooh, lok at Sakura's nice hair. Also that poor actress, doing all this shrieking for this series

Am I missing anything from this battle by not having watched Vail first? Why is Vail a Rider? Why not give him a monster power-up or something?

How did no one lose a hand lol

That was a good Revice episode, but it felt like watching the conclusion to two characters whose stories were told in the spin off (my fault for not being up to date on that I admit).

Sorry, but I can't help but compare it again to the Zanki/Desast duel. That had emotional impact, and it was a bit better because Desast had been a character throughout the series. Here, Vail just showed up and complained about where Junpei was and then left in a cloud of dust like a monster of the week. Saber was a super shallow show, but at least the Zanki/Desast relationship you saw throughout the series? Genta wasn't even in like a quarter of this series because he was hiding from Vail.

>Skipping both the previous episode recap and opening sequence cause ain't nobody got time for that.

Didn't the last two episodes not even have an opening lol

>Poor George. Why was Daddy Kirizaki holding a rock?

Oh, I thought that was a rock from a flashback? Is it not. Damned if I remember any of these stories

>Genta has probably overtaken Hiromi as my favourite rider of the show now because of his whole story.

God, let Hiromi be a character in this story. "And Hiromi went off to captain the kamen rider soldiers and was never heard from again"

On a curve, this is a 5 since it's the best this series has given. Yet no, it's a 4. Sorry Genta, I know you have your own series, but you're just the goof 'em up dad to me. Like try to be serious for more than two seconds. Nope, you're donig something goofy again. You're a comic relief, which isn't a mark of shame, but I can't trust you to carry the dramatic parts
http://takkynoko.tumblr.com/ My new blog