This kaijin is actually understandable. Not sure if there's a voice credit, but was wondering who did the voice. Wasn't sure if it was an actual woman or a guy doing a falsetto since it's so deep

Miku fighting outside got my hopes up that we'd get a change of scenery, but we quickly returned to the familiar abandoned building. We can even see the graffiti from a previous episode

15 minutes, so long. It's almost a full episode!

Have to admit the first part with the guys being brainwashed wasn't as amusing as I'd hope. Pteras versus the kaijin fight was decent though

Oh hey the witch is back. Is that the first time we hear her name?

Overall, kind of a disappointing end to the series? Was hoping for more witch stuff. Episode wasn't as interesting as previous ones, and you pretty much knew the whole story from the preview. Still, the series as a whole was a lot better than Wakusaver. And I really hope this gets picked up for a continuation down the line. 3/4 being really good and this one just being average is still pretty good to me
http://takkynoko.tumblr.com/ My new blog 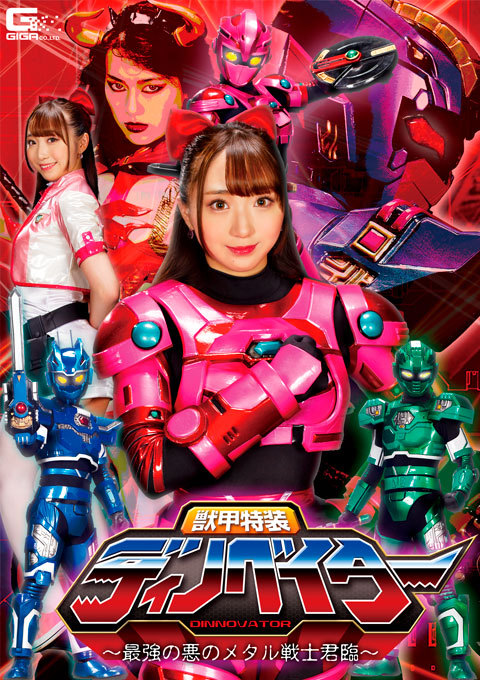 Looks like the witch and the evil Dinnovator will be a big part?
http://takkynoko.tumblr.com/ My new blog

I am glad that the girl hero is not already in trouble leading into the pr0n special. If they do Dinnovator season 2 then they work around the pr0n episode more easily, or even pretend it was alternate universe.

Really good series so far. I would be happy to see a season 2.
Top

All in all, a fun little series and I'm sorry to see it go. It had its quirks, but was still a huge step up from Wakusaver. Who knows, maybe Lunagel will have a more positive review of the movie for us since this time Pink can actually act (but very, very quietly) and the witch's outfit has been bearing more talents than the entire female cast of Wakusaver combined.
Fave | Least Fave Series so far
KR: AgitΩ or Zero-One | Drive
SS: unsure | Maskman
UM: Nexus | Ultra Q
Sentai: Akiballion: Battlemaids of Akihabara | Buddha Man
Other Toku: possibly Shinigami no Ballad | probably Sci-Rop
Top

I'll have to find a download this time, I'm not dropping another $50 on something we can't release
Top

I don't blame you. Mind you, the Wakusaver one is still tough to find, so it could be a while before someone manages to make the Dinnovator movie public.
Fave | Least Fave Series so far
KR: AgitΩ or Zero-One | Drive
SS: unsure | Maskman
UM: Nexus | Ultra Q
Sentai: Akiballion: Battlemaids of Akihabara | Buddha Man
Other Toku: possibly Shinigami no Ballad | probably Sci-Rop
Top

Luna took a look at Wakusaver 6 and decided against subbing it. Not sure what the decision will be for Dinnovator, since it actually looks like there's more story to this one
http://takkynoko.tumblr.com/ My new blog

Edit: Luna I feel I don't understand. What is the fine line in the case of subbing a smut film?
Top

Edit: Luna I feel I don't understand. What is the fine line in the case of subbing a smut film?

Huh you answered another question I had without knowing it! Which was "Who actually does the subbing here?" I guess that is you and Lunagel then? Anyway back on topic, okay no worries I just wanted to know what I was in for in the event I looked into these two shows.

After Wakusaver, I thought I had a good idea of what to expect from the final episode of Dinnovator. But for both better and worse, GIGA has thrown us another curve ball.

With respect to the episode itself, it's a shame that this was the weakest one. For what it is, it isn't bad (and still better than about half the Wakusaver episodes). But it's definitely not as strong as the three preceding episodes.

Having Pink fight Blue and Green was probably the highlight of this episode. It's a fun idea, and the transformed fight choreography has been consistently good throughout the entire series. It does however mean that Pink's actress has to carry most of the episode, and that leads to some so-so results. Even as soft-spoken as she is, she makes the action heroine thing work for her. However she seems to lack the range to make the emotional crux of the plot work. Untransforming and forcing the other two to strike her down (knowing they can't do it) is a good gambit. But it requires a forceful-yet-emotional line delivery to sell it, and we didn't get that here. Similarly, Pink whimpering at being attacked is a bit off-putting, which is to say not entertaining.

The MOTW is also an exercise in an idea whose execution didn't match. The dialog was a bit clunky. But mostly the audio mix on her voice was just all wrong; she sounded distant the entire time. Which is weird, because the audio mix for this episode (and the rest of the series) has otherwise been solid, as has the ADR. A good, threatening voice is 50% of what makes for a good villain, so the weird audio mix here ends up being a sizable handicap.

Finally, I have no idea what was going on with the ending. It's like they used an outtake or something. Blue is outright corpsing. It's really out of place.

It needed more snark, and faster line delivery overall. It was a verbal comedy scene that moved a touch too slowly.


Overall, kind of a disappointing end to the series? Was hoping for more witch stuff.


and the witch's outfit has been bearing more talents than the entire female cast of Wakusaver combined.