Put on your glasses and look at reality
Forum rules

Whoa, are we going to get more Tsubasa story?

What? Why is Shiina Naoki here? That's... actually unexpected

Murasame has become a Rider? I'm kind of jealous that they're getting all this bike action in a non Rider show

Shinchi's actor is clearly taller than his stand in lol

Hmm, I would have sworn there would be some weird twist. Like the time travelers being Jyuto or something else, but I guess we're playing this straight?

And for the eternal question with regards to Inoue, is this a one off gag or will all this shit have consequence for the remaining episodes?
http://takkynoko.tumblr.com/ My new blog

Posts: 1285
Joined: Wed Dec 03, 2008 11:55 pm
Favorite series: Go-Busters and Gaim
2nd Favorite Series: Gekiranger and Ryuki
Dreamy: Hinata Hyuga
Favorite Actor?: Mizuki Nana
Alignment: Chaotic Good
My boom: Touhou Project
Quote: "Before you criticize someone, you should walk a mile in their shoes. That way, when you criticize them, you're a mile away from them and you have their shoes." -Jack Handy
Type: INFP Healer
Location: Aperture Science Enrichment Center.

Now that we know the truth, I'm wondering if there's any double meaning in Shiina Naoki's name (椎名ナオキ). I see the Shii can stand for mallet. And Na means "name". Na-oki, to set aside the name? I dunno
http://takkynoko.tumblr.com/ My new blog

It's a bit like Don Killer, where the magazines bigged it up like this huge plot development, and oh, it's a single episode thing with very little explanation. I wanna know why this Haruka despises Tarou. I mean, other than him being an unlikeable prick in general.

Next week: Can someone please explain this exchange to me, because I have no clue what this means: 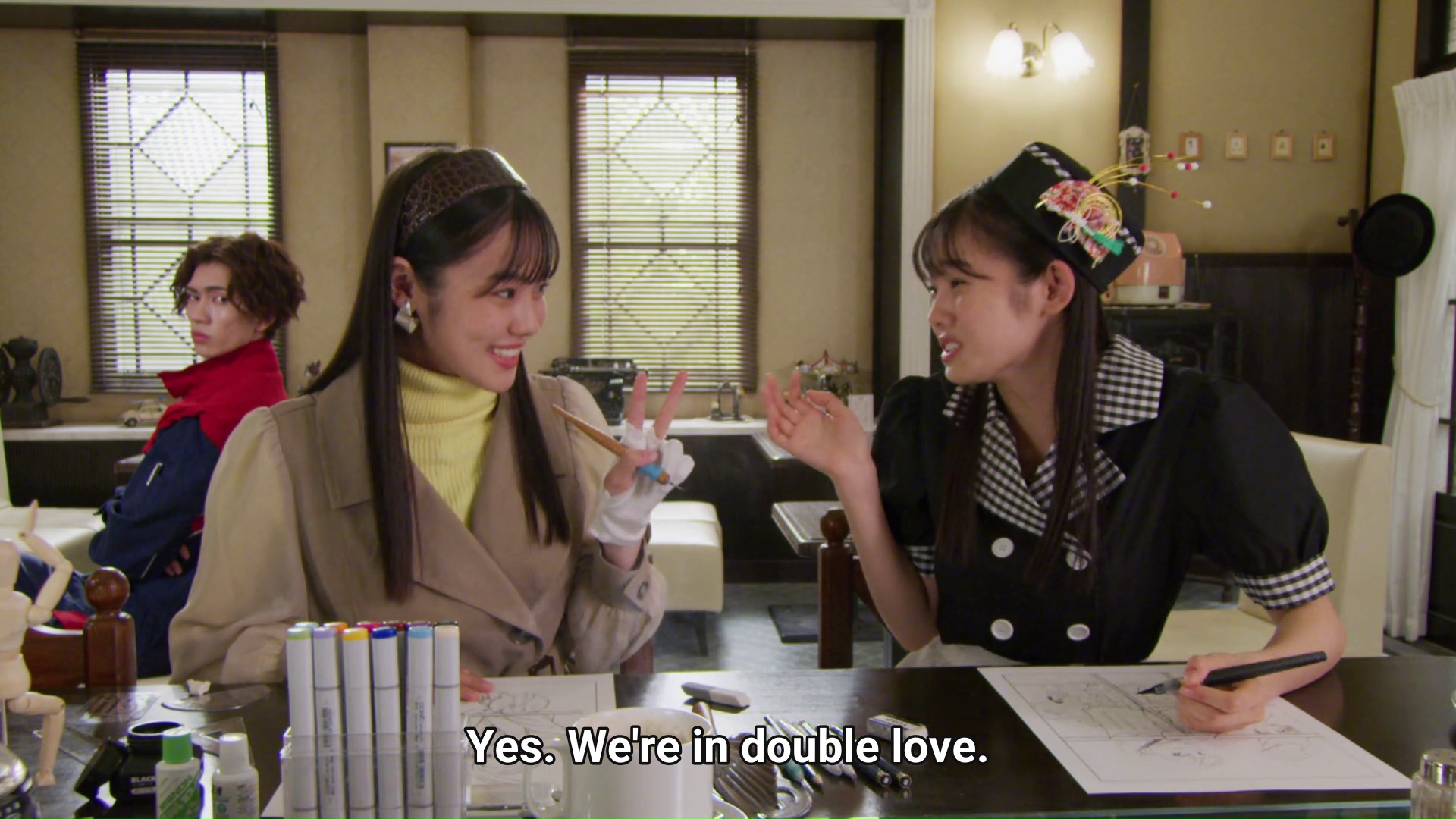 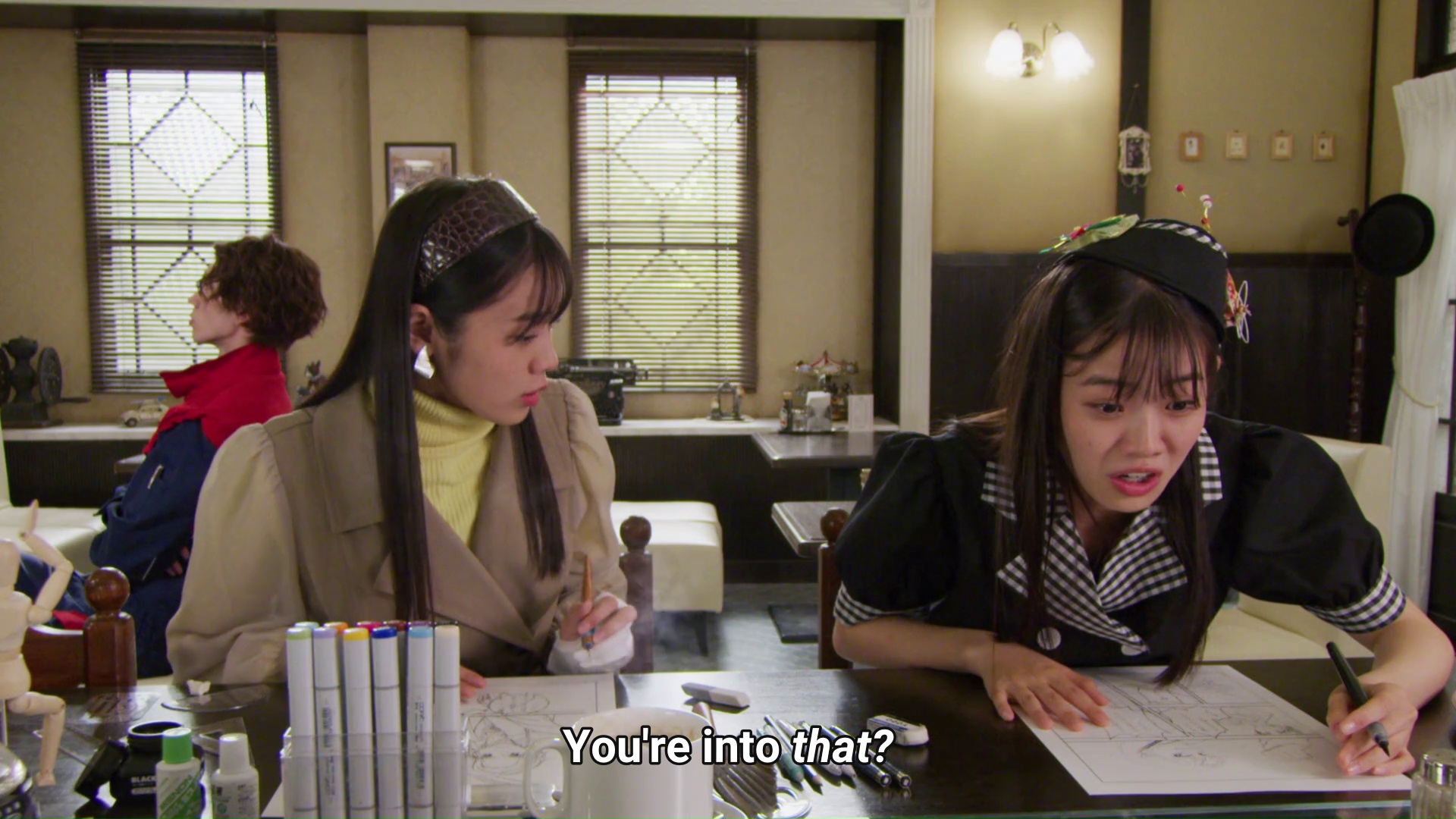 Is it some weird sex joke I'm too innocent to comprehend?
Seen:
Super Sentai: Zyuranger onwards
Kamen Rider: Ichigou-Skyrider, and all the Heisei/Reiwa series except the American shows.
Precure: DokiDoki-Go Pri
Metal Heroes: Gavan
Other: Spiderman

She literally says "We're in love x 2" or "We're in love times two". I think it just mean "we're doubly in love". There's a later attack that repeats this phrasing. I don't think there's anything more to it than that there are two Haruka and two Shins in this episode, but maybe Luna will correct me
http://takkynoko.tumblr.com/ My new blog

Rabu rabu is a pretty common phrasing, usually I think we translate it as "lovey-dovey".
Top

So Shiina Naoki is just Haruka. That was one of the more likely explanations from the get-go. But it's also one of the less interesting ones, unfortunately. Mostly because it means Haruka hasn't needed to overcome anything or grow to beat her doppelganger; the problem just went away on its own.

Shiina Naoki/Haruka rescuing Tsubasa, on the other hand, was far less expected. So I didn't see that one coming. But given the time travel aspects, it's a bit of a cheat narrative-wise; it's not quite a deus-ex, but it gets annoyingly close (and definitely leaves the impression that Inoue didn't fully plan that one through). I'm admittedly a bit disappointed that it wasn't Sononi, however that clearly wouldn't have worked with the plot thread they're embarking upon with Sononi tricking Tsubasa into killing Miho.

Past that, for an episode that is moving a fairly important plot thread forward (something that seems like a rarity in this series), it was surprisingly devoid of calories. And by that I mean there doesn't seem to be any immediate consequences to what happened here. Not that every episode needs to, but it does seem lack that satisfaction that comes from wrapping up a plot thread.

Maybe we'll get some follow-up to the dream bit with Tarou? That would be nice, but it's not something I'm going to count on.

As for the other universe (or whatever it was), I don't expect we'll hear about that again, either. But that one is fine; the story is about the current universe, and it already has enough unanswered stuff going on.

At least the awful robo CGI is consistent. Every time we see Murasame's 'bot, it's the jankiest CGI Toei can come up with.

Can I use this episode to cite Inoue needs an editor? It's not good enough that Haruka and Shin are future selves, they're also from another dimension (it's even labeled on the Japanese wiki as Future (Other dimension) Haruka and Shin). Pick one!
http://takkynoko.tumblr.com/ My new blog

takenoko wrote: ↑Wed Jan 11, 2023 12:04 pm Can I use this episode to cite Inoue needs an editor? It's not good enough that Haruka and Shin are future selves, they're also from another dimension (it's even labeled on the Japanese wiki as Future (Other dimension) Haruka and Shin). Pick one!

I think in this case it's kind of necessary to make the plot work. If they weren't from the future, they wouldn't know what was going to happen to the OG DonBros. But if they are the future OGs, then that locks the series into following that path.

By making them DonBros from an alternate reality and from the future, they can have future knowledge while still being a distinctly different incarnation of the Bros.
Top

Hmm, I guess. I just feel like it's the feather that makes this whole plot seem overly convoluted. Was it that important for them to not know the outcome of the OG DonBros? It didn't feel like that was an issue, or could have been explained away with not wanting to ruin the timeline, etc.
http://takkynoko.tumblr.com/ My new blog

It kind of paints Haruka in quite a negative light. AU Haruka was quite willing to fuck over her other self and effectively ruin any chance of her ever having a successful manga career, because no-one is ever gonna take her seriously now that she's branded a plagiarist.
Seen:
Super Sentai: Zyuranger onwards
Kamen Rider: Ichigou-Skyrider, and all the Heisei/Reiwa series except the American shows.
Precure: DokiDoki-Go Pri
Metal Heroes: Gavan
Other: Spiderman

A little conflicted that the answer to not one, but two overarching questions (the plagiarism and the more recent question of how Tsubasa got out of Helheim) was answered as a one-episode alternate future story with almost no foreshadowing. (The closest thing I can think of was Naoki knowing and writing the end of that contest episode.) As it is, this feels like a throwaway method of answering those questions.

At the same time, though, the implications are little less than fascinating—does this mean the person who plagiarized the other OniSister's photograph from the time-rewrite episode was also an alternate-future version of that character? If so, do the DonBrothers' choices affect the entire multiverse? (If both of the above are true, it would explain why Haruka leaving the DonBros meant she wouldn't be accused of plagiarism anymore, as she wouldn't have an alt-future self there.)

Speaking of which, was alt-Haruka plagiarizing herself because it was necessary for the stability of the series, like someone also plagiarized her and there's a multiverse loop? Was she trapped here and wrote it to keep her sanity, despite what it might mean for her other self? Did she write it for a living while being here? For that matter, did she come here of her own volition to stop alt-Murasame in a Terminator plot but arrived a year early? This probably would've been far better as a three-episode arc; as it is, there's almost no way to explain everything within one episode, certainly not while having it feel preplanned.

In other news, it really does look like Tsubasa is believing Sononi, despite knowing that he killed his would-be captor. He's never been portrayed as a genius in this show, but I think there would be some sign of “is this actually a good idea?” in him; as it is, it feels like squishing a character into a plot box.

Now, all these comments indicate that I didn't like this episode. As an episodic story, though, I enjoyed it! Most of my issues here just boil down to how it's a plot-relevant episode on two counts, while still being written as an episodic one.
Watching:
Geats, Donbrothers

I kept my expectations low, but the resolution of the plagiarism felt so pointless. There is no lesson or personal growth involved. It all feels like one extended joke that didn't land the punchline.

It was so weird having Tsubasa showing up at the cafe to draw the picture. It was such an artificial way to have Tsubasa team up with Haruka to track down Shiina Naoki.

The popping sound effect while putting on the costume head was silly.
Top

Ha, I did enjoy that
http://takkynoko.tumblr.com/ My new blog

I wonder if this episodes had some misdirects? What if Sononi was the one who saved Tsubasa and did it while wearing the rabbit suit because she thought that it would confuse the Jyuto? (Sononi does randomly put on the rabbit suit this episode.) What if this whole season was breathed into creation by Haruka writing a manga (this world being Shoujo-Manga-topia) so the alt-haruka thing isn't supposed to make sense, just be a reason for the way things are? Maybe the final scene of Haruka drawing a love love picture of her and Momoi will cause a big change in Momoi?

So many questions, so few episodes left.
Top
Post Reply
15 posts • Page 1 of 1